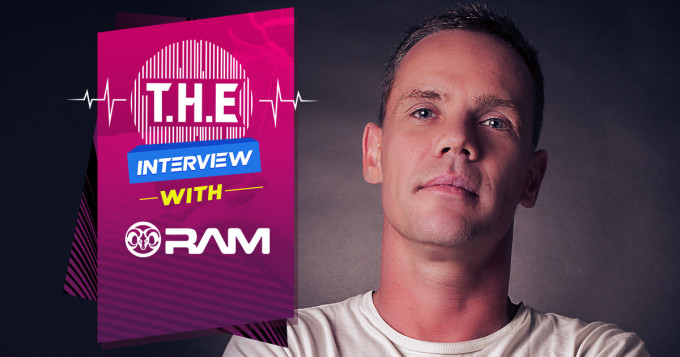 RAM: three always-capitalized letters that scene-wide, for the last five years, have become synonymous with emotive yet ballistic trance.

A man who has Amsterdam all-but running through his veins, his home city has provided the base from which to triangulate his Grotesque record label, parties and weekly radio show. Through an unstinting run of high-profile gigs and 7 successive Beatport Top 10 hits, the Netherlander has expedited his way through the ranks, establishing a position with which to challenge its highest echelons.

Now, in the next natural move in that trajectory, summer 2015 sees RAM present his debut long-player. Out now on Beatport, across 14 extraordinary, breath-stealing pieces of music, he puts into the sharpest of sonic perspectives what’s seen him become the force he has.

We managed to speak to him about his album, with the focus being on inspirations, collaborations – in particular the one with Susana, his 5 essential tunes of the moment and how he manages to put so much emotion into every track of his. Have a read to know what he had to say! 🙂

T.H.E – Hi RAM, let me start off by telling you that you are one of the most inspirational artists I’ve had the pleasure of listening to. Nothing in this world comes easy, plentiful of long nights and dedication goes into creating something magical. From all the tracks on the album we have heard so far, nothing short of spectacular could be said to describe the simplistic beauty in which you bring each track together. This album has definitely tugged at our heart strings and made us appreciate life even more. It is truly an honour to interview you! 🙂

RAM – Thank you for your kind words the pleasure is mutual 🙂

T.H.E – Right before the release date, what were you feeling leading upto it? What were your expectations, what did you want fans to take away from this album? It seems like each track is entailed to take listeners on an emotional journey, was this the intended outcome?

RAM – It’s a bit of a funny feeling working on the album for the last 1.5 years with a lot of emotions, passion and mixed feelings . And now it’s finished and it leads to a sort of closure in my life. Because the album was my last tribute to my wife Amelia who passed away 1.5 years ago. This was for me a way to give myself some distraction and also put my feelings into the music to deal with the situation. Music always has been my outlet for my feelings. Whether I am mad , sad or whatever I will play the music that will get my feelings in balance again. And to produce with the emotions after such a difficult time is just a healing process. Now my part is done and I think the people will feel my emotional journey throughout the entire album. So yes the outcome is perfect for me.

T.H.E – With each and every single one of your tracks, we feel the emotion run through us. How are you able to put so much of emotion into each and every track?

RAM – Well like I said the album is based on my way of dealing with the death of my wife so it’s about all the raw emotions from life and not about making another trance track for the dancefloor. It’s about loss, pain, love and the will to go on and make something of my life, so that my angel eyes will be proud of me. I think the music that truly comes from life experiences is the most strongest there is. You put your heart into and this will be felt by the people.

T.H.E – The vocalists that you have chosen truly have such angelic voices, how did you know they were perfect for the intended track?

RAM – Well in the process of talking to them to ask if they would like to be part of this album, I explained to them what the album was about and what my feelings were. And almost everybody knows how it feels to lose a loved one. They understood my feelings so well that magically they wrote lyrics that were just spot on with what I had in mind . It has really been a privilege to work with them.

We first sent a basic demo to them and let them do their thing and when we got the vocals back and listened to them, we got the feeling how to lift the voices up even more in the theme of the song.

T.H.E – You have worked with Susana twice on this album, on ‘RAMelia’ and ‘Someone Like You’. We know for a fact that she’s quite talented. How was it working with her?

RAM – Susana is one of my favorite vocalists. She’s got so much soul in her voice that it just reaches your heart instantly. She’s amazing and I love to work with her. It’s like sometimes you work with people and then all expiations will triple because you lift each other up. Then the magic happens.

T.H.E – There are plenty of stunning collaborations on this album. How did they come about? Are there any fun anecdotes to share from the studio?

RAM – Sorry to disappoint you there but when you working on a album like this it’s pretty serious business and to tell you the truth, I had more tears then laughs while making this. But of course its not all serious things only.. there are some pretty complex melodies in it that provided us with some grey hairs extra …

T.H.E – Creating and compiling an album takes a tremendous amount of dedication and effort, how were you able to remain focused throughout this journey?

RAM – I had the privilege that my good friend Geert Huinink helped me compose the album so with out him it would have been 10 times harder. We’re a really good team and understand each other very well, so it’s great to work with somebody with so much knowledge of classical music. But also I just sometimes had to give it a break because I ran out of energy and inspiration. After some tours you’re just so tired and empty its no use to sit in the studio. Í almost had a burn out also so I needed to get some time off to get back in balance.

T.H.E – Where there any difficulties encountered when compiling this album? If so, how were you able to overcome them?

RAM – Of course you have the standard problems like you’re a bit stuck or made something that after all isn’t good enough. Or working with vocalists that don’t understand your vibe and after many tries you know it’s better to each go our separate ways and move on. But that’s all part of wanting the best and making an album.

T.H.E – Being able to translate emotions into music is a difficult task and yet you have done it so well. Hearing “RAMelia” for the first time literally brought tears to my eyes, and I still listen to it regularly. How are you able to make listeners feel what you feel when you’re producing these tracks?

RAM – I don’t know what happened with that track it was just pure heavenly inspiration from the people that worked on this.. Like Susana she knew Amelia so she just was spot on with the lyrics. I was crying for half an hour when I listened to the vocals she’d sent me. And after a little change it was just all about Amelia and for Amelia. Never in my life their was a track made so fast and with so much love and emotion then this one. This was pure feelings.

T.H.E – I know your wife is your first and foremost, the greatest inspiration and she would have been immensely proud of what you have accomplished thus far. How much has she inspired you to create this album?

RAM – Its like I said before I had the feeling that I had to do this for her and about her and my feelings. The only way for myself to deal with this was to keep showing my love for her and share this to the world. It was a healing process and it still is. Not a easy one but a pure one from all my heart.

T.H.E – Your music inspires people around the world to believe in love and to never take it for granted. Is there any message for those who listen to “Forever love”?

RAM – Well you said it already.. This album is about love and made with love for Amelia but also for all the people around the world. As gratitude for all the support I’ve received during this difficult time. To show my respect for all the people. And that each and every one of you should believe in their self, respect each other, love each other and love yourself but also love what life is showing us. Don’t take it for granted !! And when you give love you will receive love ..

T.H.E – Finally, your 5 essential tunes of the moment.

RAM – Outside my new single Elijah from my album they are:

If you still haven’t, you can grab your copy of RAM’s debut album, “Forever Love” via the portals mentioned below.

You can also check out our review right here.