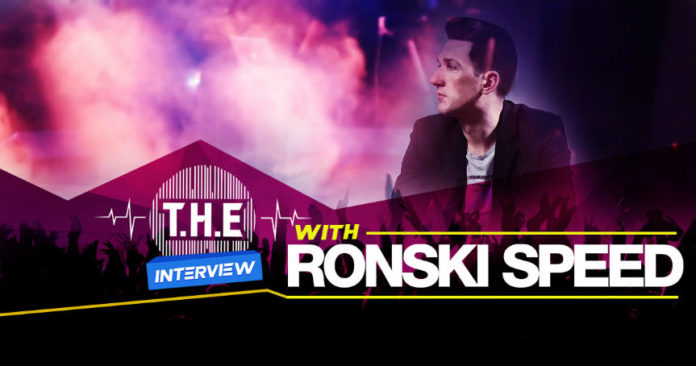 For many years Ronski Speed has been one of the most consistent names in the international trance scene. Known for hit singles like “The Space We Are”, “Rise Again” and “Lasting Light” his works have been featured more than 20 times as the Tune of the Week by ASOT over the years. He also created various remixes for Aly & Fila, Armin van Buuren, Above & Beyond, Markus Schulz and Tritonal. Ronski Speed has been part of Euphonic for many years but he also released on Armada, Blackhole, Vandit and Anjunabeats.

In 2014 he launched his own label, MARACAIDO. With MARACAIDO he now has the artistic freedom to produce and release his idea of a fresh and modern trance sound.

Finally on May 25th, Ronny Schneider, better known by his stage name Ronski Speed, has released his mix-compilation, “New BREED” which is sure to prove to the world, the amazing ability of this talented artist.

We had the chance to speak to Ronny about this compilation and what it means to be supported by industry heavyweights like Armin van Buuren. Have a read. 🙂

T.H.E – Hey Ronny! Firstly, thank you for taking the time out for this interview. Massive congratulations on your album release.

Ronski Speed – Thanks it is absolutely my pleasure.

T.H.E – Describe the anticipation leading to the release of the album. What are the thoughts which generally crossed your mind?

Ronski Speed – We wanted to showcase a lot of new stuff signed on our label “Maracaido Records” which we re starting to build up recently.

T.H.E – Every album title has a story to it. What is the story behind the name “New Breed”? In regards to your previous album “second world”, what is the difference when compared to “New Breed”?

Ronski Speed – It is a about the new music featured on the compilation. New artists like Nic Callan, Alex John, Matrick, Sylvermay who we really want to give a chance to release their tracks.

T.H.E – With every major project comes a lot of hard work and long studio hours. What kept you motivated when things got harder?

Ronski Speed – Oh this is like always, the love to the music.

T.H.E – With the track “Calm Behind The Storm” where did the inspiration come from to produce a track like this, where the beat as well as the lyrics fit so perfectly together?

Ronski Speed – This was again a long journey from the first harmonies and ideas till the songwriting and lyrics. I did the songwriting together with a real good and talented songwriter from UK.

T.H.E – How were you able to choose vocalists whose voices just flow with the beat of the music, is there anything particular you look for?

Ronski Speed – I like a lot of vocalists and worked with a lot of nice ones together in the past like Emma Hewitt, Aruna, Jes etc. But I’m always in the search of new talents of vocalists that don’t release a tune every week. So Lucy is the perfect choice after “rise again” to create a massive follow up. This compilation features one of the new remixes that are released now aswell.

T.H.E – Every track is meant to entice a specific emotion to the listener, what emotions are you looking to stir up in your listeners?

Ronski Speed – I’m always structuring my sets to get a good flow from the beginning till the end. Starting a bit progressive and finishing at 138 BPM. Every single track brings different emotions from more dream-trance till full club tracks like Matrick, Sylvermay.

T.H.E – Armin van Buuren has constantly supported you with more than 20 “Tune Of The Week” accolades on his “A State Of Trance” radio show. How does it feel that you have major support from such major artists?

Ronski Speed – That is simply awesome and gives yourself the power to continue.

T.H.E – Finally, what message would you like to convey to up and coming artists who look to you for inspiration?

Ronski Speed – Keep on believing in yourself.

T.H.E – We wish you the very best in everything, especially “New BREED”. Thanks again! 🙂

Well if this doesn’t entice you to check the compilation, maybe our review will. Do let us know what you think of it! 🙂

EDM News Akshay Bhanawat - March 30, 2020
1
In these exceptional and challenging times, Tomorrowland wants to unite the People of Tomorrow across the globe – through the power of music. On...