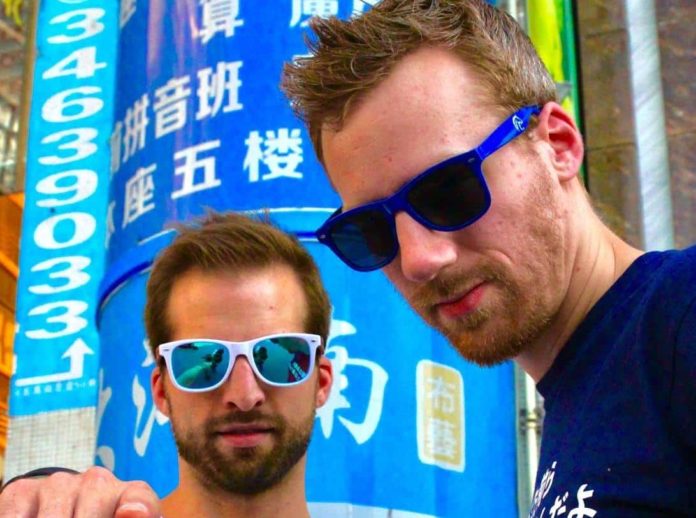 Wæde Wätts came together through an everlasting bond of music, from the moment Jerry and Matthew instantly clicked an unstoppable partnership was formed.

The Avenoir album has been almost 2 years in the making and the long-awaited release is causing quite the stir in the Trance scene. With 12 astounding tracks, we caught up with Wæde Wätts to discuss the making of ‘Avenoir’.

T.H.E – Hey Jerry and Matthew, how are you currently holding up in this crazy time?

MJB – My day job has gotten busier during this time, so I have been staying very busy. Making music and bouncing ideas off of Jerry when I can… I’m also learning Dutch and playing a lot of Echo VR. I actually play with some Dutch guys who I consistently speak with. It’s great!

Jerry – We are doing well. Very excited about how big this year has been for us. We are trying to keep our heads sharp with maintaining focus on creating more and more music.

T.H.E – Talk us through the inspiration behind the Avenoir album?

MJB – I had a collaboration track of mine get played on ABGT 245, and after that, a few people hit me up online. Among them was Jerry. We decided to make a track together (Exulansis, which became Opia), where I made a bassline around Jerry’s middle section. It was great. Our synergies were discovered then.

When I first met Jerry in person, it was in Hong Kong at ABGT 300. The synergies online were even stronger in person! After the event, I followed him over to China just for a vacation, but then we found out we had a lot more in common than just music. It was like I was experiencing a memory in reverse (What Avenoir means) because I felt like I had known this guy my whole life. It was some weird, parallel universe type stuff I was feeling! He felt it too.

Among the things we had in common, like our Dad’s looking similar, both being servers in a previous life, our Mom’s working in the Dental Field… We both found out our favourite book was Ready Player One. This is when we decided to become Wæde Wätts together. It was destiny. We then went in the studio and made our first track together from start to finish. The result was Avenoir, our title track.

Jerry – We really wanted to deliver something really fresh and unpredictable. Before this album, most music in trance and progressive got to a somewhat stale state. We wanted to give something that would take the listener on a journey from the first to last track of the album. I can’t speak for all producers but one of the reasons I started was because I got tired of everything that kept coming out. I would imagine most of us want to create something new with influences of old.

T.H.E – What were your goals when you first began creating the album?

MJB – Honestly, at this point, we hadn’t even considered self-releasing an album. The idea to make it all into an album come the next time I was in China. Jerry had also started Get Served Records, and it was the perfect avenue for release. I just wanted to make something we both like. We didn’t want to be tainted by the commercialist “THIS MUST SELL OR ELSE” feedback from the “gatekeepers” in the scene.

Jerry – In a weird way the album somewhat came together so naturally, we didn’t think too much about goals in the beginning. We finished one track. Then another and then another and then eventually we got to a point Where our music became something of a story. Once we recognized that, we decided on an album. At that point, we made it a goal to release an album and try to reach Beatport trance top 10.

T.H.E – How long has it taken to compile these 12 tracks?

Jerry – Nearly 2 years. We teamed up to create Wæde Wätts after finishing 3 tracks together. Teaming up really pushed each of us to strive for better music and taught us patience to sit and plan our future.

Which track is your favourite and why?

MJB – My personal favourite is Peyton Sawyer. The reason is the voiceover in it. It’s a quote from One Tree Hill that I got Mandy Jones to do a voiceover of. Peyton is a character that LOVES music, but she likes the art of it over everything. She takes an internship in LA and quickly realizes that they are way more about the business than the art. When she reaches her breaking point, she quits in front of her boss and the executive leadership team by saying –

“You were wrong yesterday when you said the kids in the clubs were just there for decadence. I think it’s more like romance and hope and inspiration and that feeling that you get when other human beings pick up basic instruments and make sense of your world. And the day that I think it’s just about making money is gonna be the day that I’ve betrayed everything I believe in about music and life and myself.”

This is exactly how I feel about music. I love her guts and ambition to stay true to herself, and to lash out like that at people who are corrupting art… I wish I had half the guts she did. So yeah, that’s why I like it… Plus… it has a bangin’ baseline that destroys the club! Other than that, my favourite track is Rise. It’s some of Jerry’s best work J

Jerry – I love 2 tracks. “Peyton Sawyer” and “Rise.” Peyton Sawyer has an important message that we want people to know about us. Just listen and you’ll see where we are coming from and why the album is so diverse. “Rise” because it was our biggest collaboration yet having worked with Meredith Bull and Mavrek. It was a wonderful learning experience to get 4 people’s minds on 1 idea and I am in love with the result.

T.H.E – Who would you love to see supporting Avenoir?

MJB – Obviously, Armin or A&B because that gets the most reach… But I also want to see support from Fatum or Andrew Bayer. They are my absolute heroes because they realize that you can actually use the entire sound spectrum in your Electronic music and their music doesn’t sound cookie-cutter or homogenous… Shocker!

Jerry – We would love to see Ilan Bluestone, Armin Van Buuren, Above & Beyond… Andrew Bayer and Andrew Rayel. Anjunabeats is home to some of our favourite artists, so anyone on their roster.

T.H.E – What was it like working with Get Served Records?

MJB – Considering it was our own label, it was great! We had complete control because of the self-release nature. It feels good to know that it hit Number 1 on Beatport Trance for a week and Number 8 on the overall charts without the backing of the Gatekeepers. People just supported us and that felt really good.

Jerry – Amazing! Purely because it’s our own label.

T.H.E – You work with quite a few artists on the album, how did you decide who to work with?

MJB – They are all our friends. We have great respect and admiration for all the artists on the album. We are all part of the group of underdog producers just trying to make it in the scene. We wanted to represent that with all the songs we did, but especially the collaborations. The entire album is kind of a shout-out to underdog producers.

Jerry – Some of the tracks started with feedback from friends. We sent ideas to other people or they sent ideas to us and the suggestions were so well received that we decided to make the tracks into collaborations. It all fell together quite seamlessly. Shout out to our collaborators! I’m telling you now… These guys are the future of trance!

T.H.E – How would you sum up the overall album to someone who hasn’t heard it yet?

MJB – It’s an Electronic Music Smorgasbård for people who don’t just care about partying… It’s about the music. If you are into that, there is quite literally something for everyone. Plus, as an added bonus, you can still party to it. That’s what I like about trance. It’s like that gigantic tower rides at theme parks that shoot you up in the air, and then you fall as well as opposed to just dropping. With Trance, similarly, you can experience both sensations. It’s not just about getting really messed up on drugs. The music is outstanding too.

Jerry – Strap in and get ready to go on a musical ride. It’s intentionally a constant build from slower to faster. It’ll warm you up and before you’ll know it, you’ll be dancing and jumping. (Hopefully) Ha!

T.H.E – Finally, where can people go to grab their copy?

MJB – If you want to buy it, that’s incredible. Beatport, Amazon, iTunes etc. You can also stream it on Spotify if you want. Or, if you want the continuous mix file, there is a video of me spinning the entire album from front to back here.

I uploaded this audio file to our Soundcloud as well. When you hear it in this fashion, you really hear the journey that it is.

Jerry – if you want to support us the most buying from Beatport.com would go the farthest. But it is everywhere you can choose to listen. Spotify, SoundCloud, amazon music, iTunes, etc.