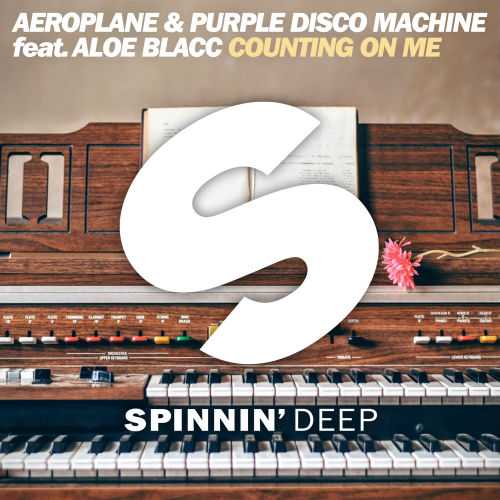 Aeroplane and Purple Disco Machine have teamed up once again for a strong piece of house music, this time featuring none other than Aloe Blacc on vocal duty. ‘Counting On Me’ has already received widespread DJ support, and is out now through Spinnin’ Deep.

It’s a sweet collab that’s been set up here. Belgian DJ/producer Vito DeLuca, aka Aeroplane, has been on the move for some years now, dropping his high praised nu-disco sound, firstly culminating in critically acclaimed 2010 album ‘We Can’t Fly’, followed by a tour-de-force of club and festival gigs, presenting his unique take on nowadays nu-disco and balearic house. Meanwhile, his tracks and remixes caused a same stir, recently highlighted with his collab with Alex Metric under the name Metroplane.

German DJ/producer Purple Disco Machine on his turn has also been making waves for a while, releasing some serious club hits since 2011 under the moniker of his much in demand ‘deep funk’ sound. In practice this means the dance floor gets a solid dose of nu-disco, funk, house and deep house, which landed PDM loads of milestone gigs, including a residency at well known clubnight Glitterbox.

Earlier this year, the guys teamed up for the instant-anthem ‘Sambal’, a stunning piece of deep house with captivating steeldrum melody line. A classic at first hear, receiving lots of DJ support this summer, the record turned into a festival favorite.

And now, the guys have returned for an exciting continuation of their collab. ‘Counting On Me’ is the next step of their exploration of current deep house, with captivating piano chords and a soulful vibe turning the track into the ultimate feelgood dance tune. Add to this the inspired vocals of Aloe Blacc, the world famed soul singer most known for his 2010 breakthrough single ‘I Need A Dollar’, and you can expect one of the most promising dance tracks of the year.

“We produced ‘Counting On Me’ in the same two-day session as ‘Sambal’. When we started we wanted to make two types of tracks, firstly a balearic disco track that we would both want to play during our sunset & pool party sets over the summer (‘Sambal’). And secondly a modern vocal disco house track that referred to both the classic house and to the indie disco scenes that we could play forever (‘Counting On Me’).”

“With this last track, we knew we had something really good going on, but left it for a few months to concentrate on ‘Sambal’. In the meantime Aeroplane’s manager played the ‘Counting On Me’ demo to his old buddy from the LA hip hop underground: Aloe Blacc. He loved it ! And here we are now…” – Purple Disco Machine