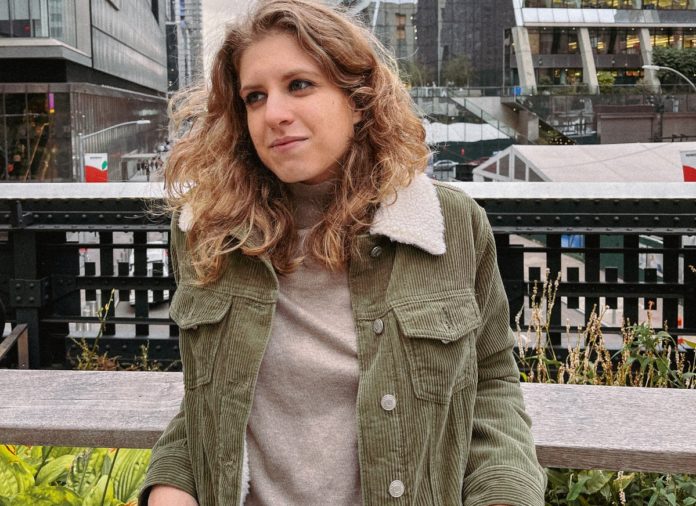 Enhanced Chill is delighted to present ‘Something Familiar’, the debut artist album from Blonde Maze.

American, NYC-based multi-instrumentalist and producer Blonde Maze, AKA Amanda Steckler, has quickly become a leading name in the world of indie electronic music through an exceptional catalog of singles and EPs since first starting the project in 2015.

Her unique take on the genre, explored through a dazzlingly intimate vocal style, introspective and poignant lyrics, and an exquisite blend of organic and electronic production, has garnered her a global fan base and respect amongst her peers.

She’s seen support in the forms of millions of streams across streaming platforms, spins on leading U.S. radio station Sirius XM Chill, features on platforms such as Billboard Pride, Paper, Pigeons + Planes, Clash, and Nylon, has supported acts such as Elderbrook, The Shadowboxers, and Vallis Alps and played iconic festivals and venues like SXSW, NYC’s official Pride Fest and the Music Hall of Williamsburg.

After moving to Florida at the start of the Covid-19 pandemic in 2020 she began putting together the first pieces of ‘Something Familiar’, an album inspired by love and loss explored amidst the dissolution of a relationship.

‘Not All Flowers Bloom’ and ‘To The Moon’, released in the middle of 2020, were the first tracks to appear from the album; two stunning, evocative productions that captured her whirlwind of emotions against a backdrop of global turbulence. She relocated back to New York City in 2021, re-establishing herself in her home city, focusing her energy on this ambitious album project.

In April 2021 she kicked off the album campaign in earnest, starting a run of four album singles with ‘Diamond Eyes’, one of the album’s highlight tracks and a perfect synthesis of its themes. ‘I Think About’ followed, her second collaboration with Minneapolis producer Attom, with ‘Being Pulled’ and ‘One House’ coming in quick succession over the course of the Summer.

‘Something Familiar’ lands in the middle of the Fall season. Its twelve tracks are a perfect companion piece to a season that can be at once buoyant, optimistic, wistful, and melancholic. The songwriting across the album is Blonde Maze at her impeccable best.

She translates feelings of heartache and longing into songs that will pull at your heartstrings and console, finding hope in despondent situations. Her vocals are profound and sincere, and her production across the album shines bright as she crafts cohesive sonics and injects each track with an energy that is simultaneously soothing and effervescent.

“’Something Familiar’ is a collection of songs that detail the yearning for the love and comfort of the past. The album is personally inspired by the conflicting emotions of wanting to move on from love, but not understanding how to let it go. It’s about learning what’s best for yourself and how to piece your independence back together while fighting the gravitation towards the comfort of your past – something familiar. When our lives change, we end up seeking out something familiar, something to grasp onto that feels safe. This album is driven by hopeless love, moving on, and letting go; it is about balancing the comfort of the past with the promise of the future,” Blonde Maze says.