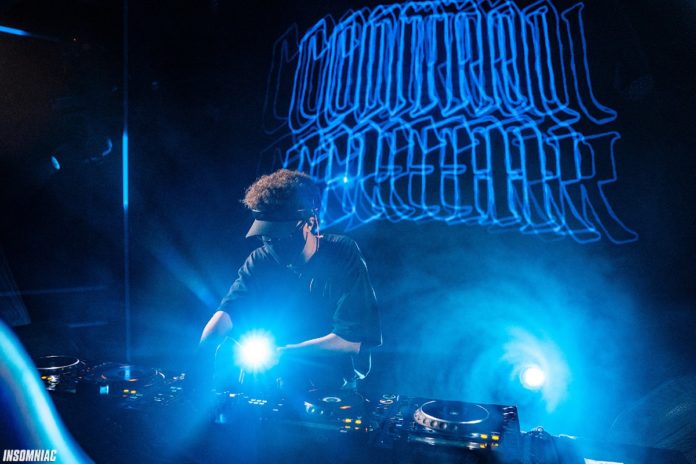 Hukae and Control Freak sync up for the first time ever on a snarling dubstep collab called “Hold Up” for Bassrush Records.

During the summer, Hukae let his forward-thinking approach to dubstep shine on the most recent edition of the ‘Prophecy’ compilation album. With its mission of unearthing the hidden gems from the bass music realms, the emerging producer from England found himself in good company with a squad of hotly tipped artists who are operating on a similar wavelength. After making his debut on Bassrush, he’s ready to up the ante with a full-fledged single with the help from an equally hyped talent from across the pond. New York’s own Control Freak goes berserk with him on the collab front, as they combine forces to bring the pain with “Hold Up.”

The pair of punishers kick off the proceedings with a twinkly melody sprinkled lightly with distortion, as the lines spiral slowly into oblivion before taking a detour down a path of complete destruction. As soon as the kick begins to pick up speed, the entire mood gets kicked off its axis and gets swept into a deluge of invasive tones and textures that no amount of bracing oneself beforehand could soften the blow. Shrieking synth crashes and slabs of low-end come flying in at every angle, while a gang of digitized bleeps and bloops keep the meter flickering in the red zone. The juxtaposition of glimmering chords and the brash beatdown powering the drops creates a compelling power struggle, almost sizing itself up to the dynamic achieved with the synergy between the brains behind the controls.

“Stoked to be releasing this track with Hukae,” says Control Freak. “He’s been making some of the best, unique-sounding tracks I’ve heard recently. Also, very happy to be releasing it on Bassrush! I have a lot of respect for what they do for the bass scene and I’m glad they were interested in the track.”

“Super gassed to finally be releasing my track with Control Freak,” adds Hukae. “Can’t lie, he’s easily one of my favourite producers and is always bringing some mad shit to the table, so big love to him always. This is my second release on Bassrush now after ‘Zonked.’ Always looked up to Bassrush from when I first started producing—they showcase up-and-coming artists and give people a platform to express people their art; nothing but respect to them for that and for showing enough interest in our track to release it!”

Hukae has been making a name for himself over the last couple of years, having kept to a consistent release schedule that has seen him churn out quality goods for imprints such as Gud Vibrations, Bassweight, and NSD: Black Label. He also made a recent appearance on Insomniac TV via the Bassrush-hosted Malignant Showcase, featuring absolute mayhem from Marauda, Aweminus and Papa Khan. On the flipside, Control Freak’s buzz is nothing to dismiss, either. His release schedule has been slammed with a sound that carefully straddles the line between grimey drum & bass and gritty dubstep, with releases locked from Disciple, SLUGZ Music, LW Recordings, and more. Both sides of this coin are blowing up at an astronomical rate, and it’s so fulfilling to see their projects collide on a collaboration of this magnitude.