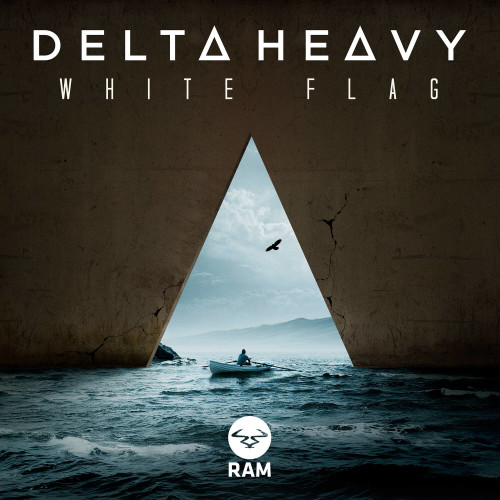 If you thought that all the tracks on “Paradise Lost” were done, well you’re wrong. Delta Heavy have opted to give us a little more music to enjoy in the form of a VIP version of “White Flag” which is the 4th track on the album.

Let me just mention that this is one of my favourite tracks on the their debut album, “Paradise Lost”. I love the ethereal liquid dubstep feel, something different from Delta Heavy which so works well. And then I hear the VIP version and I’m totally blown away! Well because its Drum & Bass so yeah I love this genre and I was thrilled to hear this version of the song.

The original version starts off with airy sampled vocals coupled with cinematic pads, bass pad and subtle claps. A swoop of whitenoise brings in the meaningful lyrics of female vocals to hook us into the song. Following through with the build-up into the dubstep break. The sidechained saw pads we’ve come to know about the liquidy side of dubstep mixed in with the harder basslines is a perfect combination. In this particular song; though Delta Heavy kept their d&b reese style bassline in a dubstep format just to add more emotion and tenderness to the song without forgetting the main object which is to make us dance and feel the song.

Now bringing us to the VIP version. This track starts off with a beautiful guitar melody riff which is such a nice touch. It makes the song more emotional. Still keeping the subtle reese bass pad of the original song, with the subtle transition into the first lyrical verse. They didn’t change the structure of the song too much ofcoz since its a VIP, not a remix, keep that in mind. The chorus lifts us into the drop. From liquid dubstep to liquid funk. One might say that the original is more slow paced compared to the VIP mainly due to the beat pattern, but honestly the intensity of both this tracks are pretty much the same.

I can sing along loudly to the songs and let go, feeling every sound wave touch my soul. The VIP has the Drum & Bass essence, a beautiful guitar breakdown, epic reese basslines. Ending off the VIP they have included an orchestra of strings adding to that cinematic feel I mentioned before. Just perfect. Look I really like both versions. But you guys need to judge for yourselves and let us know what you think. Definitely take a listen to the VIP version of “White Flag” if you haven’t, its a must. Support the artists and buy the track.

You can read our review of the ‘Paradise Lost’ album right here.