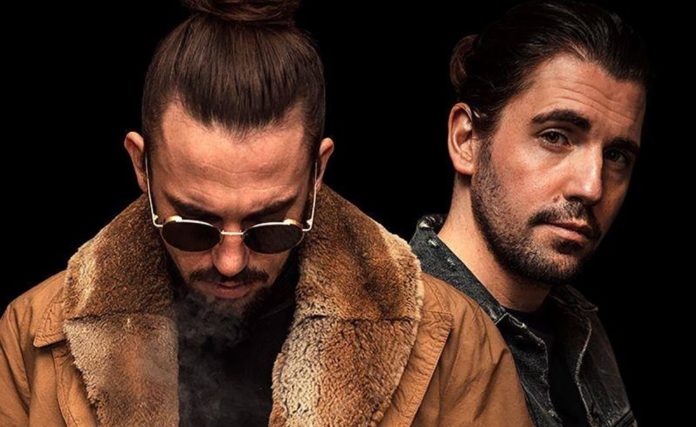 Opening with the irrefutable voice of H.P. Baxxter, ‘We Love Hardcore’ is the seismic collaboration between German cult band Scooter and the festival wielding megahit duo Dimitri Vegas & Like Mike.

Slamming together the building blocks of their respective styles and giving birth to a monstrous musical baby with ‘We Love Hardcore’, the two powerhouse groups have created earth shuddering ripples that will continue to be in effect once the festival season resumes.

Talking about the collaboration Dimitri Vegas & Like Mike said: “Scooter are an act that needs no introduction. We’re fans of what the guys have done over the years, so this collaboration was a real fun project to be a part of, and we’re proud to welcome H.P. Baxxter and his legendary band Scooter to our Smash The House label.”

A revered German happy hardcore and techno act who have achieved phenomenal global success as one of the rave scene’s outliers. The most successful home-grown chart act in Germany, the band have sold over 30 million records earning more than 80 Gold and Platinum awards. Their range of hits includes ‘Hyper Hyper’, ‘Weekend!’, ‘The Logical Song’ and ‘Maria (I Like It Loud)’. They are comprised of lead vocalist H.P. Baxxter, German DJ/musician Michael Simon and musician/producer Sebastian Schilde.

Award-winning Belgian brothers Dimitri & Mike have kept up an impressive pace of exhilarating releases over the past few months. From popular hits like ‘Say My Name’ with Regard to ‘Do It’ with Mexican influencer Kimberley Loaiza and producer Azteck, which received over 40 million views on TikTok in the first 24 hours and since has received more than 235 million TikTok views. The brothers have also dropped tracks like ‘Back To The Oldskool’ with Quintino and ‘Too Much’ with DVBBS and Drake OVO signed singer Roy Woods. All of this adds to their extensive run of big-hitting singles with Snoop Dogg, Daddy Yankee, Wiz Khalifa, Ne-Yo, Paris Hilton, David Guetta and Hans Zimmer.

Dimitri Vegas & Like Mike & Scooter – ‘We Love Hardcore’ is out now on Smash The House.