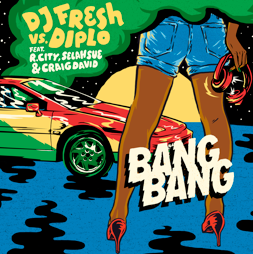 After selling over 3 million singles and bagging 7 top 10 records in just 5 years, UK bass music legend DJ Fresh is dropping his new single Bang Bang to round off 2016 with a… well, bang!

The highly infectious new single overflows with raw vocals from R. City, menacing bass, and heart-racing sirens, pulling you into the melody with its distinctive hook. The single offers effortless vocal performances from Selah and Craig which perfectly match Fresh & Diplos production abilities making this track a sure fire hit!

Reigning as one of the UKs most prolific multi-platinum producers, DJ Fresh has worked with artists including Rita Ora, Ellie Goulding and Dizzee Rascal and is showing no sign of slowing down with his chart-topping collaborations anytime soon. With two #1 singles under his belt and a plan to swap tour life to focus more on the studio, 2017 heralds a new production era and an all guns blazing approach as DJ Fresh also launches his new writing and production team Fallen Angels