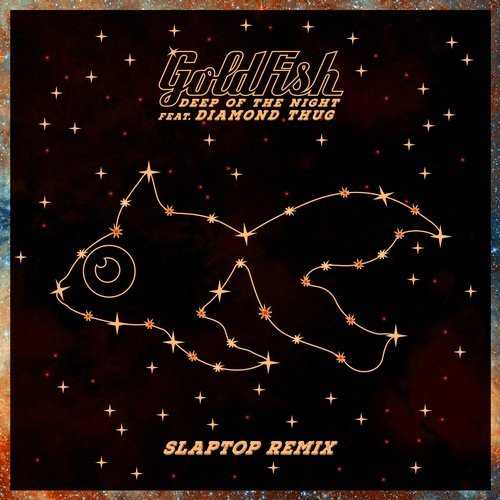 Goldfish’s single ‘Deep Of The Night’ feat. Diamond Thug was a massive hit by itself, and they have just taken it a step further with the release of an official remix.

The remix comes from Slaptop, who was also the opening act for Goldfish at their Goldfest shows at the Mezzanine in San Francisco on March 10th and 11th. The original version of Deep of the Night is the lead single for Goldfish’s forthcoming album which is due to be out later in 2017.

The story of ‘Deep of the Night’ begins where it all started for these lifelong musicians – the beaches nestled around Cape Town, South Africa. Dominic Peters and David Poole were driving home from late evening surf, casually listening to the radio and serendipitously stumbled across a first, and what turned out to be only – play of a new band called Diamond Thug. Dom and Dave were instantly hooked, and tracked down the band, who co-incidentally also lived in Cape Town. A jam session was set up at the Goldfish studios and so, a song was born.

Listen to the remix here:

How To Choose The Best Music For Your Video Projects?

Editorials Akshay Bhanawat - June 30, 2022 0
The first step in selecting the perfect soundtrack for your video project is to decide the mood. It's crucial to choose a song that...

David Guetta Will NOT Perform At Tomorrowland 2022

EDM News Shantanu Gursal - June 29, 2022 0
Yes, David Guetta won’t be performing at Tomorrowland for the first time in its history. The dance music star’s name was found missing once...

Music Akshay Bhanawat - June 29, 2022 0
Harvey Carter is Tutara Peak. The UK producer, songwriter, and creator returns at the heels of a breakout year with his first single of...

Mix Of The Week: Lucas Zárate

featured Akshay Bhanawat - June 29, 2022 0
Lucas Zárate is a young DJ/Producer born in 2001 in Tucuman province in the north of Argentina. In 2019, Lucas was intrigued by the...
ABOUT US
What started as an interest, slowly turned into a passion, and before we knew it, we had curated and founded a thriving community of avid electronic dance music lovers.
FOLLOW US
© Copyright 2022 - T.H.E Music Essentials