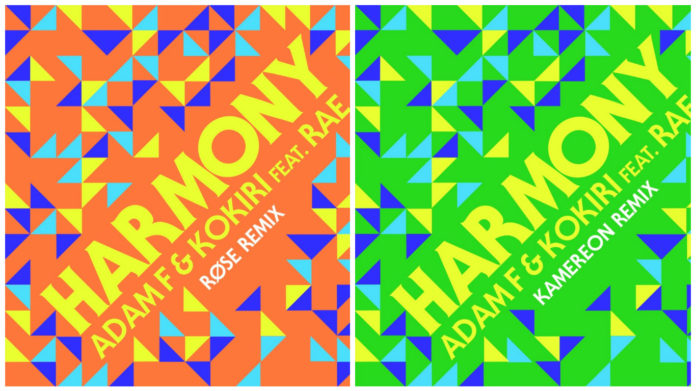 Adam F, Kokiri and Rae have revealed the final two remixes for their single ‘Harmony’.

The first is from elusive producer Kamereon, who has previously released on the Nothing Else Matters label alongside Shakecraft with ‘Sweat’. The London-born producer has given ‘Harmony’ a club-ready makeover: in keeping with her underground roots, Kamereon has pitched down Rae’s vocals and sampled over a stomping bassline and echoing synth stabs.

Last up is french producer Røse. A skilled remixer, he gives the track an uplifting, garage-tinged makeover with a two-step beat and original keyboard chords.

‘Harmony’ is the result of the meeting of three differing musical minds; Adam F, the mastermind behind legendary drum n bass track ‘Circles’ on Positiva, has since gone on to win a MOBO award for his album ‘Colours’, had a hit with Dizzee Rascal, and founded Breakbeat Kaos Records alongside DJ Fresh – with whom he collaborated to produce ‘Believer’. Consistently diversifying and pushing his musical skills, Adam F has even worked on film scores, and co-wrote the top line for Secondcity’s no1 hit ‘I Wanna Feel’.

Meanwhile, 25 year-old Liverpudlian Kokiri, whose debut on tastemaker label Love & Other ‘Retrospect’ was championed by Annie Mac, Pete Tong and Danny Howard, has already played a number of high-profile gigs at XOYO, Ministry of Sound, Egg and Ibiza Rocks despite still being relatively new to the scene. He is also a remixer in hot demand: in the last year alone, he has turned in reworks for the likes of Craig David, WSTRN, Tough Love and Wilkinson.

Rae, writer and featured vocalist, is in fact also a DJ, remixer and producer with a long history in the house music scene; her debut release was as lead vocalist and songwriter on Kings of Tomorrow’s 2008 anthem ‘Can’t Stop’ on Defected Records, whilst her most recent hit was as vocalist on ‘Take Me Away’ last year with SKT. Despite their differences, it’s clear that the trio share the same ear for production; ’Harmony’ showcases each of their skills to great effect.