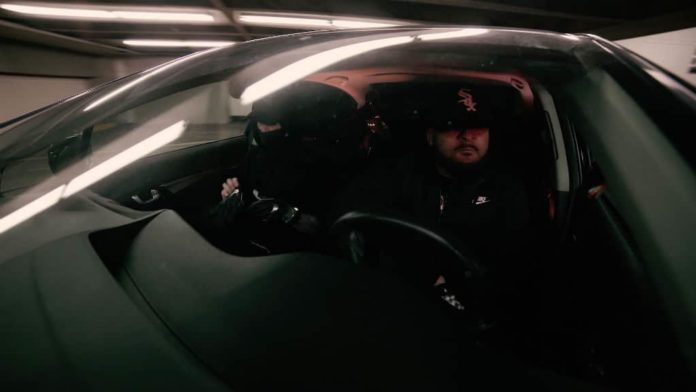 The track, a spitfire combination of Macntaj’s whirlwind rhymes and LEViT∆TE’s genre-bending sonic design, proved just the long-awaited comeback fans had been hoping for.

Now, the duo are ready to unveil another piece of their ‘Omni’ project before it’s October 24th release via Block Society. Out today, LEViT∆TE and Macntaj are releasing their first visual together for new single “Pins & Needles.” Directed by Justin Frick and storyboard by LEViT∆TE, “Pins & Needles” is a break-neck journey into chaos and malice not for the faint-of-heart. Syncing up with Macntaj’s rapid flow, the “Pins & Needles” video is dazzling in its cinematography as the video’s gripping storyline becomes progressively bewitching.

If unfamiliar with LEViT∆TE and Macntaj before now, the pair boast a number of enviable accomplishments both as solo acts and collaboratively. For LEViT∆TE’s solo career, the producer has won over his peers with a number of original productions that can be heard throughout the sets of artists including Excision, Snails, Mayhem, Minnesota, Mt.Eden, and releases on Amorphous Music (Bassnectar), Buygore (Borgore), Block Society, Cr2 Records, and All Trap Music.

For Macntaj, the 26-year old rapper, has emerged as one of the hip-hop / electronic music scene’s most prominent power players out of the North East. His work alongside artists in addition to LEVIT∆TE like Bassnectar, UZ, and Oski, have awarded the young vocalist un-paralled cosigns from industry tastemakers like Billboard, Huffington Post, Genius.com, Revolt TV,HipHopDX, Magnetic Mag, and more. Individually, both LEViT∆TE and Macntaj have caught the ear of music icon Bassnectar who heavily supported LEViT∆TE’s “God Status” in his live-sets, and asked Macntaj to appear on single “infrared” out via his last album Reflective. The pair would again find themselves in front of the bass music legend on their Bassnectar collaboration “Level Up” that was featured in the 2017 X Games.