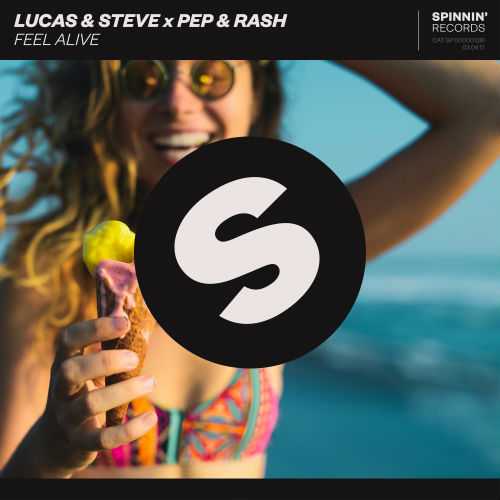 After what was a smashing collab single last year, Dutch duos Lucas & Steve and Pep & Rash have teamed up again to deliver the almost overwhelming festival gem ‘Feel Alive’.

Last year saw both duo’s team up for the first time with the exciting single ‘Enigma’, scoring major DJ support and millions of streams. And now, the guys are officially releasing the follow-up ‘Feel Alive’. It’s a track that’s been around for a while already, the melody made by Jesse (‘Pep’) two years ago, then waiting to be finished properly. When Pep & Rash recently came together in the studio with Lucas & Steve again, the team turned it into the smash tune it is now.

Lucas & Steve are on a roll. The Dutch duo kept on dropping festival crowdpleasers last year, including ‘Summer On You’, their collab with Sam Feldt turning into a worldwide summer hit (reaching 30 million Spotify streams, and counting), as well as the follow-up to this hit, the massively supported ‘Love On My Mind’ and, recently, the hit tune ‘Calling On You’.

Safe to say, the guys had a blast of a year. While making waves with their biggest hits ever, the duo played some of their most acclaimed performances, including gigs at Tomorrowland, Mysteryland, at Ushuaïa alongside Axwell ^ Ingrosso, and the Amsterdam Dance Event, including hosting their own Skyline Sessions event and performing at Sam Feldt’s Heartfeldt poolparty.

Pep & Rash entered the scene about two years ago, quickly counting as the newest taste on the block. The duo dropped its claim to fame single ‘Rumors’, coming with major DJ support, making sure all the heads were turned onto these Dutchies.

As the year progressed, Pep & Rash proved itself a steady provider of festival crowdpleasers. The guys did a much acclaimed collab with Sander van Doorn, releasing ‘White Rabbit’ (an amazing take on the same named 60s classic) on Spinnin’ Records, and released ‘Red Roses’ and ‘Love The One You’re With’, two highly anticipated follow-ups to ‘Rumors’.