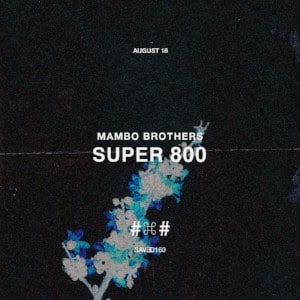 Having spent the best part of sixteen years behind the scenes of the iconic Cafe Mambo, Christian and Alan Anadon know what it takes to make a Balearic hit more than most.

Children of Ibiza legend and Mambo Group owner Javier, the duo, more commonly known as the Mambo Brothers, were born and raised in the clubbing utopia of Ibiza, exposing themselves to the very best DJs in the world from an early age.

Consisting of A-side ‘Eso Es’ and B-side ‘Super 800’, the Mambo Brothers have been playing teasers of the tracks out at brand new Ibiza superclub Hï Ibiza so far this summer as part of their residency at Hï Sundays.

A progressive anthem with a strong drum beat at the core of the production, ‘Eso Es’ has a real tribal-Balearic feel to it, with an intense build up, pierced by brief interjecting vocals as the release builds towards its drop.

‘Super 800’, carrying a more tech-house vibe, follows in the A-side’s footsteps, with an elongated build, though uses a reverberated horn and more frequent vocals to bring the track to an explosive and floor-filling climax.