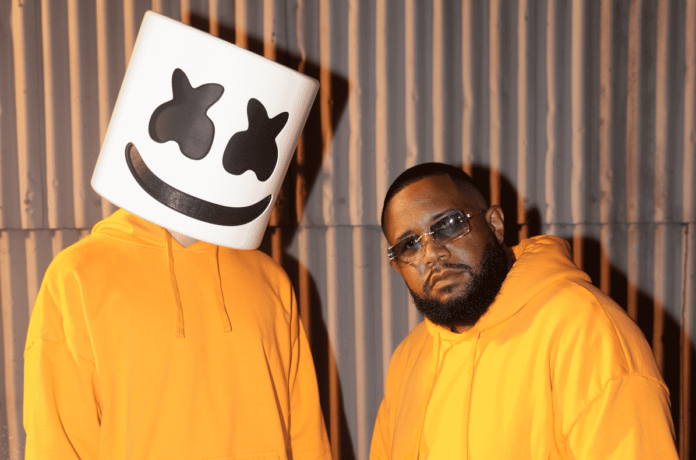 Genre-blurring global superstar Marshmello teams with dancefloor destroyer Carnage on the nostalgic rave anthem “Back In Time”. After a year of quietude and isolation, this new single is a well-timed return to the club—an ecstatic ode to long nights and good times.

With hits like “Happier” and “Alone” nestled in his boundary-pushing discography, it’s clear that Marshmello has always been interested in the emotional possibilities of dance music—a theme that “Back In Time” furthers.

Calling back to the energy of ‘90s rave tracks, the propulsion of classic techno, and the gleaming refractions of Eurodance, the song is energetic and nostalgic, perfect for creating new dancefloor memories while remembering all your favorite nights out.

“Back In Time” arrives alongside a video that does what the title promises: it sends our two protagonists to bygone eras. Marshmello and Carnage go on an animated journey through prehistoric times back to the present—making pit stops in medieval courts, ancient Rome, and World War I, among other varied epochs. Lighthearted and bright, it’s a perfect accompaniment.

“Back In Time” drops just in time for one of Marshmello’s biggest gigs in recent memory—he’s set to play the opening ceremony of the UEFA Champions League Final on May 29 with special guests Selena Gomez and Khalid. This new single is part of a productive streak for the masked producer.

In 2021, he’s already been a part of a handful of beloved singles, both on his own and with esteemed collaborators. He teamed up with Ali Gatie and Ty Dolla $ign on the heartwarming ballad “Do You Believe,” and with Benny Blanco and Vance Joy for the introspective “You.” He’s worked with 2KBABY on the low-key banger “Like This,” and with G Herbo and Wacotron on the epic “Umbrella.” Both as a producer and a DJ, he’s always kept a busy schedule, but songs like “Back In Time” prove he’s more than just prolific—he makes some of the most moving songs in dance music.