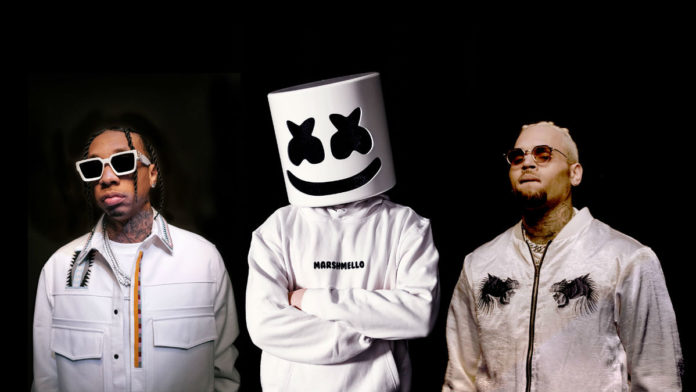 With the new single “Light It Up,” Marshmello brings Tyga and Chris Brown back together for the first time since their 2016 track, “Rumorz.”

The three artists wrote the infectious new party anthem together. Released today by Astralwerks, “Light It Up” is available for download/streaming. The official video was unveiled today in a YouTube Premiere, and saw its broadcast premiere on BET Jams and BET Hip Hop.

Rolling up to the club in the custom Marshmello truck made by RDB LA, Marshmello, Tyga and Chris Brown proceed to light up a boring birthday celebration with an electrifying performance and a bling-laden cake. The clip was directed by Arrad, who has helmed previous videos for Tyga and Brown.

Marshmello has been nominated for three Billboard Music Awards: Top Dance/Electronic Artist and – for his massive hit with Bastille, “Happier” – Top Collaboration and Top Dance/Electronic Song. With nearly 10 million adjusted singles sold, “Happier” is his biggest track to date. Marshmello has continued his remarkable run with singles featuring Roddy Ricch, CHVRCHES, Pritam and SVDDEN DEATH plus an EP with San Francisco Bay Area rappers SOB x RBE, Roll the Dice, which was released earlier this month.