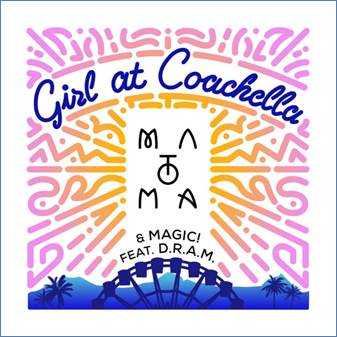 Norwegian producer Matoma is on a roll, recently hitting a million global sales of his smash hit ‘False Alarm’, and quickly selling out shows in London and New York for his ‘Party At Your Place’ tour.

Being the 37th most-streamed artist in the world on Spotify is no mean feat either, and in perfect continuity with his recent surge in success, the electrifying producer has just released a sick new track, ‘Girl at Coachella’ feat. MAGIC! and D.R.A.M.

The track stays true to the lilting, summery vibe of a host of Matoma hits, but this time, he deviates slightly from his usual house-orientated sound towards a more pop-infused, reggae feel.

Nasri, the vocalist for Canadian band MAGIC!, performs the track, which is a hedonistic tale of ephemeral love at America’s most famous festival Coachella, while ‘Broccoli’ rapper D.R.A.M. pitches in with a punchy end to the story.

“I played my first ever Coachella last year and it was a truly incredible experience. Between the two weekends I was doing writing sessions in L.A. and met up with Nasri from MAGIC! who I have always been a huge fan of because of their feel-good reggae-inspired music.

We wanted to write a song about Coachella since I had the moment of my life at that festival, so we came up with this story about a girl who teases with a guy’s feelings at heart at the festival. It’s just a fun story about the good vibes and reckless fun that people experience at a music festival.

We finished the song really quickly and then asked D.R.A.M. if he could do a verse since we felt a rapper could take the song to exciting new heights. After hearing his verse I can from my heart say that he nailed it. I was so honoured to work with such amazing artists and hope you love this feel-good summer song!”

Matoma commands a following of over 17 million monthly listeners at Spotify. He’s fast cementing a place in electronic music’s elite club, and with tracks like ‘Girl At Coachella’, it’s easy to see why.