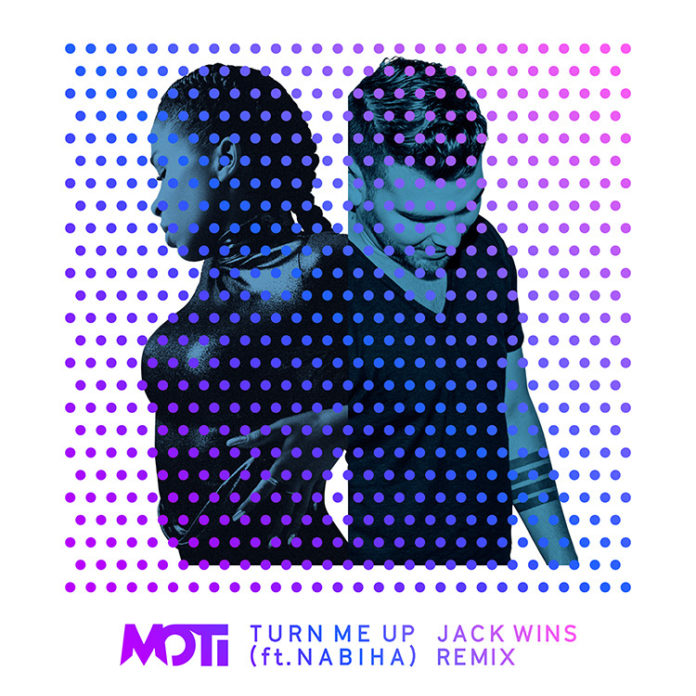 Following on from the success of the single alongside the official video release – Jack Wins remix is the next instalment to be revealed for MOTi’s ‘Turn Me Up’ ft Nabiha.

Jack Wins remix of ‘Turn Me Up’ is a high-energy floor-filler, pumped full of striking piano chords and fierce electronic stabs. Following a similar structure to the original, Jack Wins builds upon layered percussion and a rolling baseline to create his unforgettable sharp contender.

With the original release, along with the LOW STEPPA & Ryan Blyth remixes already making a huge impact across different territories worldwide, the Jack Wins remix is set to transform the record further.

Hailing from Amsterdam & signed to Tiësto’s Red Light Management, Dutch DJ/Producer MOTi first emerged on the scene in 2012 with ‘Circuits’ & ‘Kinky Denise’. Further releases on Spinnin’ Records, Hysteria Records & a #10 on the Beatport Top 100 for ‘Dynamite’ spearheaded MOTi on a global scale. Teaming up with Tiësto on ‘Back To Acid’ in 2013 via Musical Freedom, alongside collaborations with DVBBS (‘This Is Dirty’), Martin Garrix (‘Virus’ – #1 Beatport’s Top 100) & Major Lazer (‘BOOM’) each in turn lead MOTi to produce his next instalment – ‘Turn Me Up’. His breakout performance at Ultra Music Festival Miami served as a springboard into the live music scene, since securing him performances at EDC Las Vegas, Creamfields UK, Nocturnal Wonderland, Tomorrowland as well as exclusive shows at Webster Hall NYC, LIV Miami & Hakkasan Las Vegas.

Danish multi platinum selling songstress Nabiha began her journey with debut album ‘More Cracks’. Her back catalogue of productions are inspired by her West African roots and colourful upbringing in Copenhagen infused with dance, pop, r&b and urban music. Urban dance anthem ‘Bang That Drum’ shot straight into the iTunes Top 5 on release and stayed there for over 6 weeks, also peaking at #1 on the UK Urban chart and #4 on the UK club chart. Dedicating her, no. 1 Billboard Dance Chart & UK Urban Chart, follow up ‘Animals’ to her legions of loyal fans, Nabiha’s ‘Mind The Gap’ & ‘Never Played The Bass’ all played a key part in landing her position as a judge on 2016’s Denmark’s Got Talent.