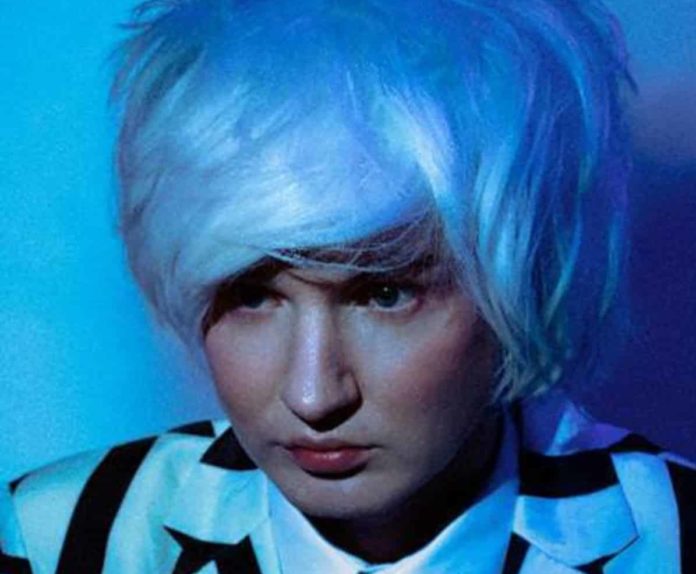 Wuh Oh says: ‘Daddio was a creative breakthrough for me. Coming from the electronic underground scene in Glasgow, It was the most Pop I had ever gone with a Wuh Oh track. Creating my own idealised version of universal pop music has since become a major artistic pursuit of mine. So many hooks smash together to create one hyperactive whole, from the old school piano riff to the blaring synth line to the vocal, which I intended to land somewhere between The Beegees and Macy Gray but ended up sounding unavoidably me. This track just wants to help you feel better.

The music video was made by just myself and creative partner Joe, an extraordinary visual artist who operates as Zones Productions. With only fifty quid, in the upstairs room of a Glasgow pub, we shot the video.

For the next few weeks we would chat nonsense for hours each day, throwing around ideas to make each other laugh. Joe then took the best of this inspiration and went to work creating the magical world and characters you see around me.

Special shout out to Andrew Sutherland, an extremely talented Glasgow artist who kindly lent us wonderful masks he’d designed based off of childrens’ drawings.

Wuh Oh has rapidly emerged as one of the most exciting new artists in the Glasgow scene, amassing almost 2 million streams on Spotify alone. The prodigious talent has already received unwavering support from some of the biggest names in the industry including Annie Mac, Pete Tong, Sega Bodega, Vic Galloway, Jamz Supernova, Dance System, Busy P, Ed Banger as well as key tastemaker platforms including i-D, Wonderland, Dummy, Crack, The Fader, Colors and Mixmag where he was named a ‘One To Watch’ artist for 2020.

Best known for tracks including ‘Saxy Beast’, ‘Life’, ‘Softstyle’, ‘Zita’, ‘How Do You Do It’,‘Pretty Boy’ (remixed by no other than Hudson Mohawke) and his remix of Myd’s single ‘Together We Stand’ released via Ed Banger, Wuh Oh’s career is on a constant upward trajectory.

Not stopping there, Wuh Oh has recently worked on a plethora of remixes for the likes of Nothing But Thieves, Everyone You Know, Howl & Hum and more, with 2021 also set to bring in some exciting collaborations.

Wuh Oh has gained recognition for his hyper-energetic live sets which see him merge DJing, prodigious keyboard playing and self-styled interpretive dance whilst performing in flamboyant custom-made outfits which are forward thinking and gender fluid.

Last year, he was set to perform at the likes of Glastonbury, Lovebox, Reading & Leeds, The Great Escape and more which have now been rescheduled.

With his own distinct sound spreading rapidly through the scene, 2021 marks an exciting chapter in the Glasgow talent’s burgeoning career. Wuh Oh’s latest single ‘Daddio’ is out now!