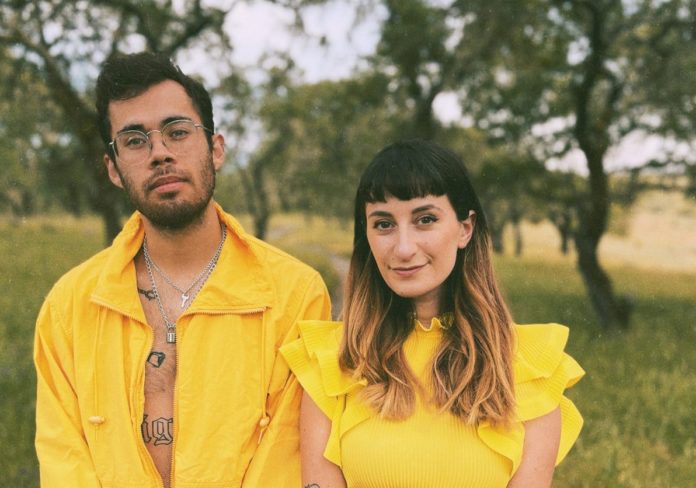 The synthpop duo PRXZM quakes with refreshing familiarity on their follow-up EP, ‘Faultlines,’ as part of Night Mode’s fifth season of releases.

Emma Maidenberg and Nick Ortega are two blindingly authentic beams of light shining through the electronic-pop space under the guise of their project PRXZM.

First forming in 2014, the two-piece band started their steady ascent in the synth scene after becoming fast friends in college through an overlapping lifelong commitment to music and a vested interest in an era when big hair and synthesizers reigned supreme. Emma is the frontwoman commanding the crowd with her earnest presence and mellifluous tones—meanwhile, Nick props up her open-book vocals with an affinity for analog gear and live instrumentation.

They’ve carved out a solid corner for themselves on the Night Mode catalog, first touching down on the then- newly minted imprint with their dreamy three-track ‘Let Me Fall’ EP, and once more on the ‘This Is Cyberpunk’ compilation via an edgier midtempo-leaning offering named “Adrenaline.” Not losing any momentum, the pair is holding their ground as they unveil their next EP.

Much like tectonic plates converging from different origins, the songs on ‘Faultlines’ carry their own distinct qualities, yet collectively harness the force to move mountains. The title offering crystallized in the heat of the moment during one of their recent weekly Twitch livestreams.

Its message of maintaining your footing while the earth fractures beneath your feet is delivered to great effect through shimmery progressions, twinkly textures and a careful cadence built around swelling confidence. “I Started This Fire” mirrors a more reflective state of being, with our pensive protagonist ruminating on past events as weeping guitar licks and waves of lofty melodies paint a picture worth a thousand softly sung words.

Closing out the package is “Oblivion,” which was conceived in the wake of the aforementioned Cyberpunk album. Taking on a darker nature than both of its predecessors, the dismal number combines a forsaken vocal delivery with punchy percussive arrangements, growling synth sequences, haunting harmonics, and a willingness to lay it all on the line.

Each of the offerings featured on ‘Faultlines’ possesses the power to trigger a reading on the Richter scale of unseen proportions and will undoubtedly shake crowds to their core once PRXZM weaves them into the new live show they’ve been diligently planning since they were last on the road.