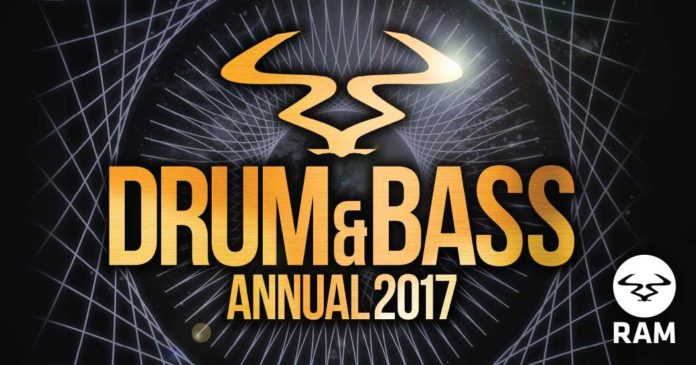 The Ram Records 2017 Drum & Bass Annual doesn’t just stand as a testament to the imprint. After working over two decades within the genre, standing at its forefront and delivering piece after piece of ground-breaking dance music, they’re immortalizing their twenty fifth anniversary with the biggest drum & bass compilation to be released since the label’s inception. Featuring a massive 60 tracks, with every name who’s trail-blazed this year’s must have releases, prepare to be thrown into the world of drum & bass like never before.

With cuts from head honcho Andy C, as well as Symmetry’s underground boss Break, neuro pioneers Noisia and break through artists such as Urbandawn, Voltage and many more, this LP caters to a range of palettes. A huge spectrum of sound is covered by the album, giving a glimpse into every corner of the genre’s entirety and delivering the finest cuts seen over the past twelve months. Whether it’s The Prototypes’ ‘Rocket Guns Blazing’, which detonated festival stages globally, or Wilkson’s dancefloor radio hit ‘Sweet Lies’, no stone goes unturned.

You’re also introduced to a wide range of remixes; producer’s who’ve already established their sound rework some of dance music’s most well-known anthems. Dimension’s twist on Deadmau5’s ‘Strobe’ was a heavily sought after record, with cyberspace counting down the days until its release. Nestling itself in the track listing alongside Shy FX’s summertime remix of ‘Stay with Me’, as well as Etherwood’s beautifully revised version of Gorgon City & Mnek’s chart topper ‘Ready for Your Love’, you’re given a glimpse into the industry drum & bass reign supreme over.

Brand new sonic artwork such as Bad Company UK’s ‘Nomad’ also makes the cut, epitomising the signings which Ram Records have embarked on this year. The roster is now packed with the likes of Bad Company UK, a quartet who’ve set a precedent and released a number of genre-defining records. Camo & Krooked also bring their Ram offering ‘If I Could’, following the recent announcement that they’ll be releasing their next LP on Ram.

Sixty tracks for you to indulge in and sixty tracks to remind yourself of how strong drum & bass still is in 2017. A must have for not only drum & bass fans, but music listeners alike, it’s a reflection of what both Ram has done for the genre, as well as the milestones drum & bass has hit over the last twelve months.