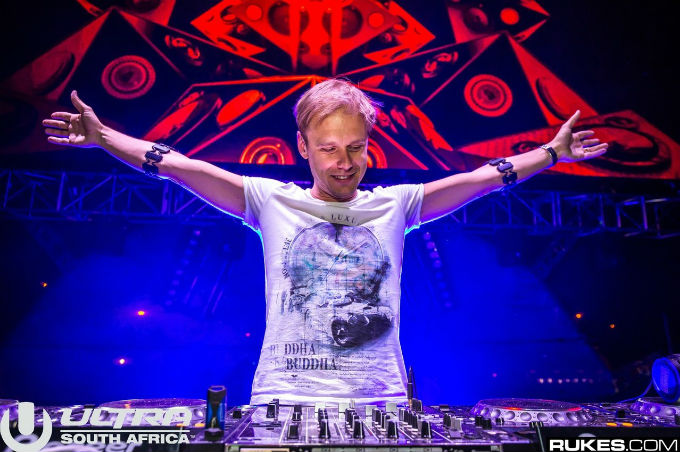 The album contains the recently released singles, “Another You” featuring Mr. Probz, “Off The Hook” with Hardwell and “Strong Ones” feat. Cimo Fränkel. Additional singles from the album will be released soon.

Sitting on top of the world and leading the electronic dance music (EDM) industry by several metrics, Armin van Buuren is constantly pushing himself creatively and musically beyond preconceived boundaries. The 15 cuts from EMBRACE demonstrate a world-wizened DJ and producer at his most mature, though fun and exuberance are never far. Each of the instruments pictured on the cover were actually used in the recording of the album. The images for EMBRACE were photographed by Anton Corbijn.

The title track features the trumpeter Eric Vloeimans in perhaps the first major dance music usage of that acoustic instrument. “Another You” featuring multi-platinum rapper/singer/songwriter Mr. Probz has been airing on American FM and satellite radio and television. “Off The Hook,” a collaboration with fellow DJ/producer Hardwell is both a festival hit and an underground nightclub staple. “Strong Ones” featuring Cimo Fränkel is the third and latest single from the album and it’s an uplifting song characterized by a sunny lead melody and optimistic message. “Heading Up High” featuring the band Kensington is one of the most robust songs from the album and it is planned as the fourth and next single for release in early-2016. Even with all the sturdy radio-friendly songs, EMBRACE still satisfies the clubbing cognoscenti with peaktime beasts like “Embargo” with Trance titans Cosmic Gate, and with the tune “Old Skool.” “Looking For Your Name” is the final song of the album and it is a wrenchingly poignant end to the journey that is EMBRACE. “Looking For Your Name” is an exceptional collaboration with fellow GRAMMY® nominated artist, singer/songwriter Gavin DeGraw. Rich in meaning and emotional complexity, the song reveals its composers’ humanity in layers of heartbreaking truth. Even after 23 years as a music producer and DJ at the top of every conceivable chart, Armin van Buuren has this time outdone himself with EMBRACE. The album is nothing short of perfection.

09 Caught In The Slipstream (feat. BullySongs)

14 Off The Hook (with Hardwell)