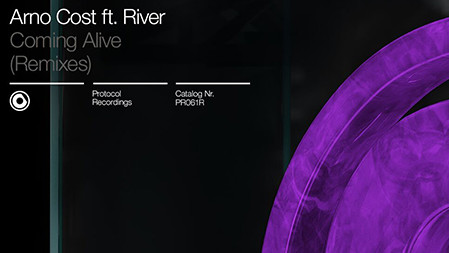 The standout title song, featuring vocals by the talented River, was an instant milestone for Cost, who experimented with more traditional house and progressive house styles on the EP. Now Arno’s home record label, Protocol Recordings, has announced the “Coming Alive” official remix package. If you liked the original, there’s something for everyone in the three renditions from some of the hottest new talent in the scene – Protocol debutants Simon De Jano & Madwill, Jimny and affiliate Exit Friendzone.

The spine-tingling version from Simon De Jano & Madwill opens the package. An electro house bomb that will have dance floors throbbing around the globe. Next up, the relatively unknown Jimny with his mellow, deep house take on “Coming Alive”, and with one listen to the chilled-out bootleg, it’s evident that the music world is going to become quickly familiar with his name. Finally there’s a funky and futuristic version by Exit Friendzone, featuring lively piano riffs and a summery vibe; Exit Friendzone might sound familiar from “Protocol Presents Miami 2016” earlier this year, on which his track “Crossfire” was featured. Check out all three fabulous versions of “Coming Alive” and stay tuned for more from these talented up-and-comers!