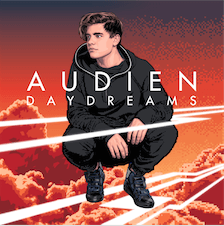 Finally, available for release in the UK – Grammy-nominated DJ & producer Audien is back with his hotly-anticipated ‘Daydreams’ EP, including the hit single ‘Something Better’ which features 7 time Grammy winners & country trio Lady Antebellum.

his four track EP showcases Audien’s abilitly to diversify and amplify his productions, taking a plethora of musical elements and binding them together to create a four track masterpiece.

A sonic departure from the usual sounds of Audien, ‘Pharaohs’ – featuring UK artist Voyageur – proves his versatility as a producer. ‘Rooms’ stays true to his roots, a melodic instrumental nod to his original fan base that helped him gain his Grammy nominated success within the dance world.

Audien has already seen success from ‘Daydreams’ following on from lead single ‘Something Better’ which has amassed over 18 million streams worldwide and will continue to transform the EP with stellar remixes from Ferreck Dawn, Kayper & MÖWE on the horizon.

For full track listing, see below.

Watch the video for ‘Something Better’ below.