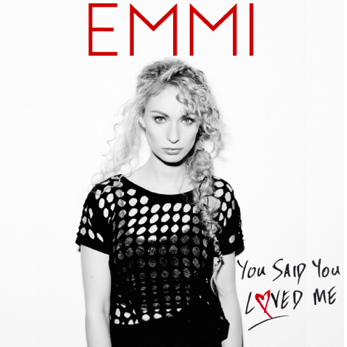 London-by-way-of-Perth singer/songwriter Emmi today returns with brand new single ‘You Said You Loved Me’, ramping up her remarkable trajectory to the upper echelons of pop.

Co-written by Emmi herself alongside David Dawood (Roll Deep, Tinchy Stryder) and Tonino Speciale (Ella Eyre, Felix Jaehn), You Said You Loved Me is a certified pop masterpiece, complete with an undeniably huge hook and cutting, dramatic strings, all driven by rumbling beats and delivered with Emmis ever-distinctive voice. The singers extraordinary ability to craft epic, alternative pop songs is perfectly showcased in a 3 minute 39 second bundle of sonic brilliance.

Emmi had originally built a career writing tunes for other artists worldwide in genres ranging from Folk to Rap and back again. Songwriting credits for the likes of Neil Davidge of Massive Attack and Little Nicki were stacked up, before a late night chat with her Mum caused a much-needed epiphany for the singer/songwriter; she had a lot to say to the world and she had to be the one to say it.

Support for Emmi flooded in from the moment the project launched, with The Guardian premiering debut single My Kinda Swag, calling it a highlight of 2015. In the hype that followed, show host Greg James found and championed the track, with BBC Radio 1 quickly following suit, naming it their Introducing Track Of The Week in January 2016.

The young talent can also count a fan in Taylor Swift, who tweeted about Sleep On It as part of her list of New Songs That Will Make Your Life More Awesome. Further supporters have included the likes of Buzzfeed, CLASH, The Line Of Best Fit, The 405, Complex UK, Idolator, Billboard and many more.

Since the release of her last single 60 Minutes in late 2015, Emmi continued her striking ascent with a co-written feature on Feders Blind, reaching #3 in the French official charts and racking up 70,000 plays on European radio by Christmas. A second illustrious collaboration came in the form of ‘Our Youth with Sonny Alven. The viral hit has clocked up over 19 million streams on Spotify to date, sound-tracked a global Pepsi campaign, and saw Emmi perform the track live at Kygos sold out shows at Brixton Academy in April.

Fresh off a much-coveted spot on BBC Radio 1s Big Weekend festival and with an arsenal of new music at the ready, Emmi is undoubtedly one of 2016s brightest pop hopes.