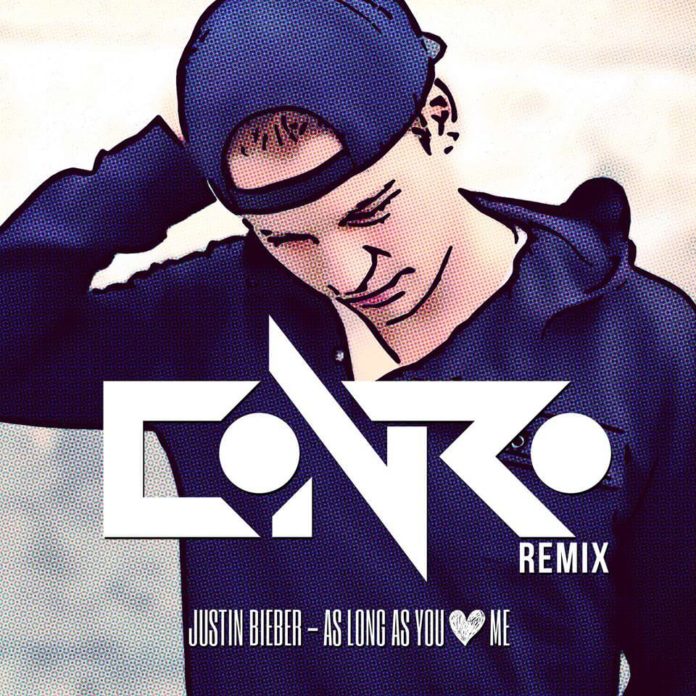 Rising Canadian talent Conro is quickly becoming one of the most talked about up-and-coming figures within the Dance music community.

Following a string of smashing projects, Conro is now back again with his latest offering  a spectacular remix of Justin Biebers As Long As You Love Me.

Coming from a musical background, Conor Patton, aka Conro, has started out playing a wide range of instruments, later turning to the world of Electronic music, reaching his first big break with his debut single Axiom  rapidly climbing Beatports Electro House Top 20 chart. Such impressive results have placed Conro on the radar of some of the globes major imprints, later signing tunes to the likes of: Armada, Revealed and WOLV. Since then, Conro has not fallen short of receiving massive support from some of the finest spinners around, landing the thumbs up from DJs like: Porter Robinson, Tommy Trash and Knife Party, whilst sharing the stage with A-list champions such as: Bassjackers, Dyro and Wolfgang Gartner.

After gaining worldwide recognition with his Dyro collaboration on Bittersweet, Conros 2016 kicked off with a colossal project by the name of On My Way Up, released via Monstercat, hitting the US Viral Top 50 chart on Spotify and supported by global superstar Martin Garrix. He is now devising his next big thing  taking a first shot with his new wonder As Long As You Love Me Remix, which hes offering as a Valentines Day giveaway.

Conros rendition on Justin Biebers track is blessed with an array of top-notch melodic inspirations, whilst blending in deeper rhythmic elements to darken the atmosphere and add Conros signature take on this production. The effect-filled vocals take the remix to whole new level, adding spice and giving it the inimitable Conro touch, whos put his signature on this world-class remix. With such a remarkable effort Conro is certainly justifying his unstoppable ascension as one of the prime names to watch out for in 2016.

Whilst you can now download and enjoy Conros stellar remix of As Long As You Love Me, keep an eye out for more exciting announcements, with his second single of the year coming up in March.

Listen to and download Justin Bieber – As Long As You Love Me (Conro Remix) below.