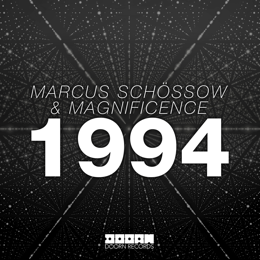 Speaking of a dream team at work! Swedish mastermind Marcus Schössow and Dutch wonder duo Magnificence sign up for a sweet collab titled ‘1994’. Already supported by many of the greats out there, it’s officially out now on DOORN Records.

On a hot streak for years now, Marcus Schössow can be considered one of Sweden’s most treasured DJ/producers. Redefining the sound of progressive house with his characteristic melodic approach, he’s released dance gems on labels like Spinnin’ Records, Revealed and Armada. At the moment, he’s again shifting his sound with this fresh tune ‘1994’, made alongside Dutch duo Magnificence.

As these guys are also known for their inventive take on big, melodic house music, it seems like a collab made in festival heaven. Magnificence entered the scene some years ago, releasing a fresh progressive sound on labels like Warner, Protocol and disco:wax. Their 2014 debut on Spinnin’ Records (alongside Thomas Newsom) sky rocketed their career even more, making them the go-to duo for invigorating, mainstage hits.

‘1994’ underlines it all. Schössow delivers his best productional work to date, while the Magnificence guys again display why they’re hailed the next best thing in dance music today. The track is as grand as possible, featuring cool oldschool piano chords and sturdy bass action, all working up to a deep, gritty drop – it’s a rollercoaster ride that’s going to work wonders on the floor!

EDM News Melody Siganporia - July 2, 2020
0
United Talent Agency (UTA) recently signed on deadmau5 for worldwide representation in all areas. The agency is a force to reckon with in all...
ABOUT US
What started as an interest, slowly turned into a passion, and before we knew it, we had curated and founded a thriving community of avid electronic dance music lovers.
FOLLOW US
© Copyright 2020 - T.H.E Music Essentials