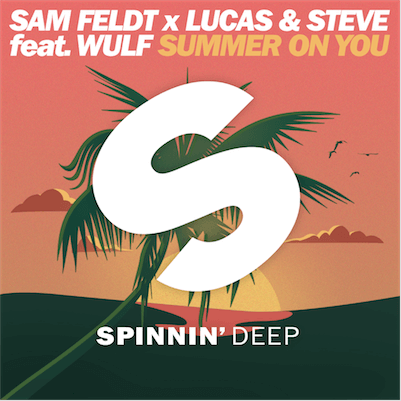 Following on from his huge chart success with ‘Show Me Love’ & ‘Shadows Of Love’, Sam Feldt can now reveal his next installment. ‘Summer On You’ is a collaborative release alongside Lucas & Steve out today via Spinnin’ Deep.

The ‘Show Me Love’ hitmaker is no stranger to the dance music world. With fans from across the globe playing a key part in the tracks 87million Spotify streams alone, as well as continued support across Hype Machine blogs – including near #1’s for Sam’s remixes of Sander Van Doorn & Firebeatz ‘Guitar Track’, I Am Oak ‘On Trees And Birds And Fire’, EDX’s Indian Summer Remix of ‘Show Me Love’, along with original releases such as ‘Show Me Love’ & ‘Drive You Home’ – ‘Summer On You’ is sure to follow suit.

The collaboration alongside fellow Dutch DJs Lucas & Steve portrays pure musical intellect from some of Spinnin’s finest talent. ‘Summer On You’ is a guitar driven record, laced with beach-rhythmic beats and the soulful vocals of Wulf. Tied with emotive lyrics and infused with steel drums; ‘Summer On You’ unites music lovers worldwide, all reminiscent of that one summer they’ll never forget.

On the back of his performances at Coachella and Ultra Miami earlier this year, Sam has also been busy reworking Birdy’s ‘Wild Horses and Rob Thomas’ ‘Pieces’. On both remixes, Sam displays his high quality producing talents. Continuing on with a successful 2016, Sam Feldt will performing in Ibiza this summer alongside the likes of Kygo, Bakermat, David Guetta and Klingande.