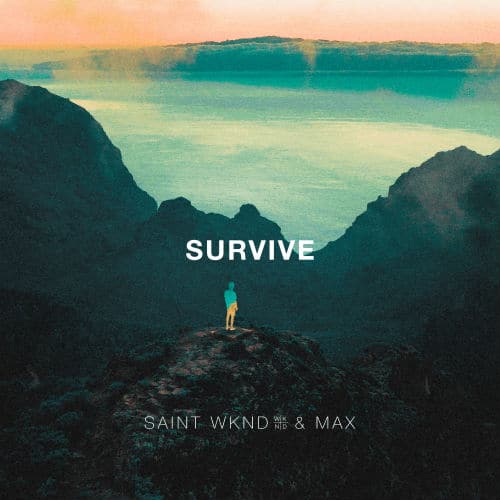 SAINT WKND and MAX have teamed up to release the huge new single ‘Survive’, available via Nothing Else Matters / Ultra Records.

‘Survive’ follows the release of SAINT WKND’s debut EP ‘Golden Youth’ this year, which has already clocked up over 7 million streams and gained support from BBC Radio 1. Sonically, ‘Survive’ moves the SAINT WKND story on once more; opening with a soaring synth refrain which explodes into a bass-heavy, trap influenced chorus. MAX’s electrifying vocal interplays with arpeggios and earth shaking percussion to devastating effect. ‘Survive’ is destined for club dance floors as well as festival stages for the rest of the year.

SAINT WKND said “‘Survive’ started as an instrumental that I wrote between studio sessions in London. I was just playing around with an arpeggiator at first, liking how it sounded so weird. I sent a package of different beats over to MAX to see if he liked any, and included this one. It was a real surprise when he chose it, it’s so different. Working with him has been amazing – his vocal range is simply insane. As soon as he sent me his first vocals, the whole production for the song fell into place”

MAX said “Been a fan of SAINT WKND’s production style for a minute now and when he sent me the base track for survive I immediately connected with it. The progression of the topline and production together after the last few months has been so rad and unique and I’m so happy to share the final song finally!”

SAINT WKND designed the artwork for ‘Survive’ himself, and maintains a strong connection to all of the visual output associated with his music.

Music Akshay Bhanawat - March 28, 2020
0
Following a top 5 Beatport smash with his Subdue EP last year, Iglesias returns to Solardo’s Sola label for a meteoric collaboration with rising...
ABOUT US
What started as an interest, slowly turned into a passion, and before we knew it, we had curated and founded a thriving community of avid electronic dance music lovers.
FOLLOW US
© Copyright 2020 - T.H.E Music Essentials