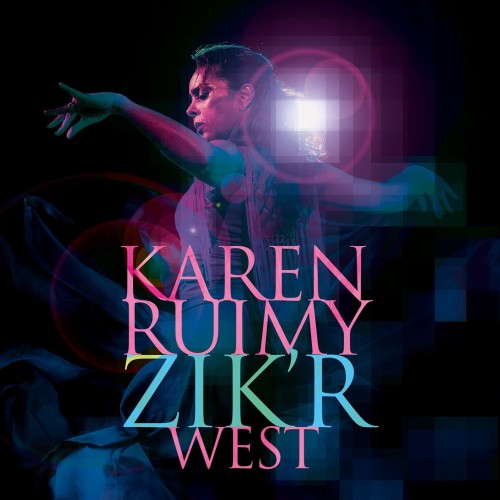 Singer and flamenco dancer Karen Ruimy and uber-producer Youth (The Orb, The Bloody Beetroots, De La Soul, Transglobal Underground, Blue Pearl) unite once again, following on from their work on Ruimy’s 2014 album ‘Come With Me’. Developing a live show tracing the development of flamenco from its roots in India, through the Middle East and onto Spain and infusing each part with the musical influences of those regions. The studio recordings of the music for the show make up the album ‘ZKI’R – East’.

In order to reflect the truly global nature of music and how the sounds of the East have traveled, the music has also been offered to some of the most talented producers for remixing in order to create ‘ZKI’R – West’. Featuring such luminaries as Groove Armada, Marc Mac of 4Hero, Mr. Scruff, Atjazz, DJ Spinna, Monsieur Adi, Mark de Clive-Lowe and A-Sides alongside emerging talent Belanger, Aaron Ross, Nathan Haines and Mike Patto, the album injects Deep House, Nu-Jazz, Drum and Bass, Chillout, Dub and Breakbeat into Ruimy and Youth’s work and puts it in a whole new context.

By selecting remixers who understand the importance of the soulful elements of dance music, none of the spiritual power of the original compositions is lost. Rather it is like hearing a spoken message translated into a different language, opening up the music to a wider audience than might otherwise hear it.

Come With Me (Mr. Scruff Remix)

Listen to Karen Ruimy & Youth – Shake it up (Groove Armada Dub) below.