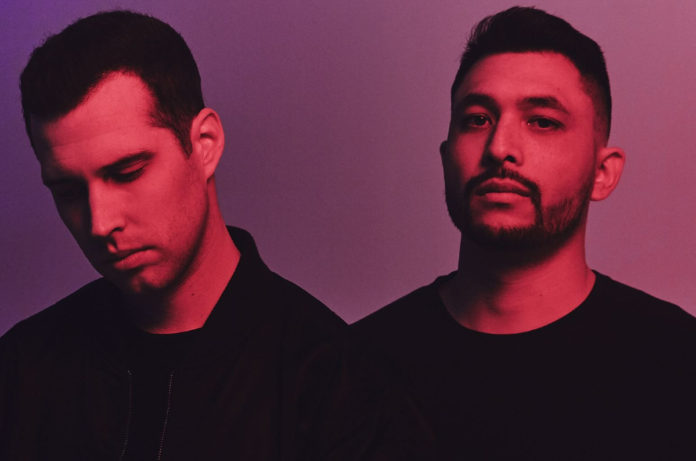 SLANDER is inflicting a world of pain on their new collab with MARAUDA, “Suffer,” featuring singer-songwriter Elle Vee, as the latest single to take shape on Gud Vibrations.

The last few months have presumably been a blur for Derek Anderson and Scott Land—together known as SLANDER—based on the frenzy of highprofile releases they’ve placed in circulation.

One after another, the dance music heavyweights have been skewing towards the rail-riding allure of their dynamic through a string of collabs pitting them against Subtronics and Ganja White Night on “Gravity” and “Miss You,” respectively. Keeping with that same energy, the boys are now looking to the southern hemisphere for another high-ranking joint release.

Australia’s bassbin pillager MARAUDA is the next name on the docket, and it’s safe to say he came to bring the pain. Locking arms on their sadistic dubstep single “Suffer,” this diabolical pairing creeps into the picture to provoke pure punishment of the highest order. Joined by the eloquent talent that is Elle Vee, the L.A-based songstress adds a hint of honey to the agony through her breathtaking belting.

Emotionally bruised and battered, she sings with conviction as her weary heart takes a stand against the torment of a love turned sour. The somber piano motifs and tension-building drums eventually give way to an onslaught of trilling synths riffs that slice straight through grinding bottom-end, unsettling distortion, clinking percussion, rapid-fire bleeps, and enough rage to make any amount of sadness seem inconsequential. It peppers in just the right amount of anguish before going for the jugular.

Attendees at Excision’s dino-friendly Lost Lands festival were treated with a sneak peak of the blistering collab when SLANDER broke the word of its imminent release by bringing the Malignant label-boss on-stage with them while fans were free to revel in its wrath.

By the looks of it, SLANDER and MARAUDA have a bona-fide banger on their hands, so expect to get hit with the collateral damage of “Suffer” at a festival near you.