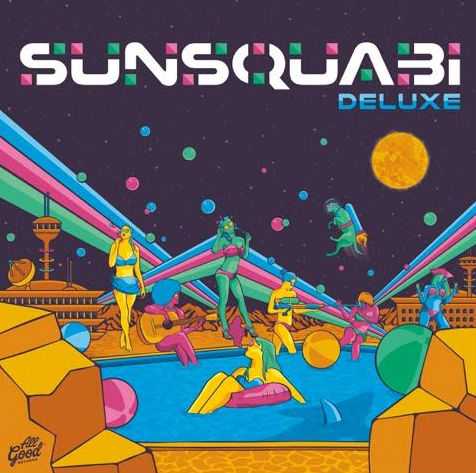 In keeping with the impending release of their massively anticipated sophomore EP, ‘Deluxe’, which is out this Friday, April 7th, Colorado trip Sunsquabi have given us one final peek with their latest single and EP title track “Deluxe.”

A signature new production for Sunsquabi, “Deluxe” strikes a stunning sweet spot between up-tempo funk and psychedelic rock thanks to a combo of piano, electric guitar, and synth. The instrumental track strongly invokes the sonic styling of Ratatat, and continues to solidify new Sunsquabi’s evolving sound.

If unfamiliar with Sunsquabi before now, the group are renowned as one of the groundbreaking acts leading the electro-funk scene. Having fused together live electronic music with jam band culture in an unprecedented way, Sunsquabi have taken their live show across North America, to festivals from Electric Forest to Camp Bisco, and back at their local watering hole, the world renowned Red Rocks Amphitheater. Gearing up for a massive 2017, Sunsquabi are hitting the road again for a mega18 city tour across North America.

As for what to expect from the live show, Sunsquabi have enlisted Tucker Wilde’s Wild Stage Dynamics to build out a full-stage production. Fans will be able to catch the Sunsquabi experience live at Brooklyn Bowl Las Vegas, a return to Red Rocks in Colorado, Summer Camp Music Festival, and a series of North America tour dates outlined below.

In the meantime, be sure to check out their brand new single “Deluxe” out now via All Good, stay tuned for their full EP available later this week.

May 04- The Miramar Theatre- Milwaukee, WI