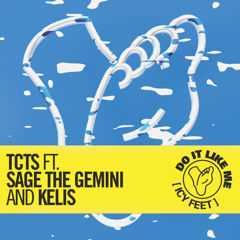 Manchester-based producer TCTS has dropped a huge new single ‘Do It Like Me (Icy Feet)’ via Ministry Of Sound.

The energy-packed underground anthem ‘Icy Feet’ has been given a vocal makeover, and the single lands big as the instrumental continues to gain massive traction. It’s been in the Shazam top 200 chart for several months and most recently entered the Top 10 on Shazam’s future hits as well as peaking at #3 in the Shazam UK Dance Chart.

TCTS – aka Sam O’Neill – has recruited an unbelievable all-star cast for the new edit, inviting LA based ‘Now and Later’ rapper Sage The Gemini and legendary R&B powerhouse Kelis to join him on vocal duties.

Do It Like Me (Icy Feet)’ boasts a stomping bassline and an undeniable synth underpinned by Sage The Gemini’s punchy rap and Kelis’ cheeky sultry vocal. The playful call-and-response lyrics are almost a bragging and boasting challenge between the two artists which provides the perfect dynamic to complete the beat. Add to that an explosive vocal hook, and the track instantly turns this floor-filler into a chart ready transatlantic hit!

Ready to ignite dancefloors once more and climb straight to the top of the charts with ‘Do It Like Me (Icy Feet)’, the excitement surrounding TCTS and this latest single is sure to set him up for global domination and beyond.