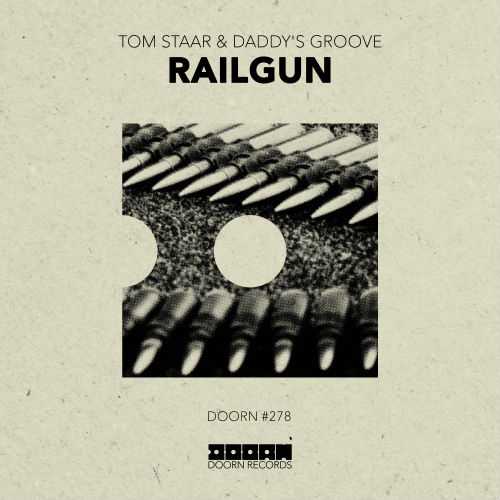 After both acts recently released two stunning new tracks on the Cartel label (Tom Staar with the percussive highlight ‘Me Sueno’, Daddy’s Groove with the strong Kryder collab ‘Street Life’), they now team up for ‘Railgun’, a tune fully focused on the dance floor, and an early 2017 DJ’s favorite for a while already, out now on DOORN Records.

Super producer Tom Staar has delivered the highest of quality house music over the last few years giving him extended runs on some of the biggest labels in dance music, namely Spinnin’ Records, SPRS, Axtone, Mixmash, Size and his Kryder co-run label Cartel.

However, arguably his finest work has come in 2016, releasing a striking collection of tracks; from last year’s IDMA winning ‘De Puta Madre’ (a collab with Kryder and The Wulf) to his uplifting NEW_ID collaboration ‘Disappear’ and one of the stand out tunes from this summer ‘The Funkatron’ (alongside Robbie Rivera).

Daddy’s Grove has also come a long way. Hailing from Naples, Italy, it’s been an impressive trail to international fame for Carlo Grieco and Peppe Folliero. Since day one their productions were picked up by major artists, followed by endlessly touring the globe, getting their records released on various labels, while remixing artists like Kylie Minogue, Whitney Houston, James Blunt and Enrique Iglesias.

By now Daddy’s Groove is renowned on both sides of the musical spectrum, known for its blend of catchy pop and energetic dance music. After signing with Spinnin’ Records this year, this was displayed best by their collab with DJ star Bob Sinclar on the hit single ‘Burning’.