Ahead of their eagerly awaited return to RC Cola Plant for their annual Miami Music Week party, Above & Beyond have revealed the remaining support acts set to appear alongside previously announced special guest Seven Lions.

Joining Jono, Tony & Paavo will be Anjunadeep’s Ben Böhmer, who brings his newly launched live show to the RC Cola Plant’s unique downtown event space for the first time, plus Anjunabeats mainstays Oliver Smith & Spencer Brown, both of whom are enjoying their biggest years to date. Recent Anjunadeep signing and Japanese artist Qrion completes the lineup, bringing her refreshingly eclectic sound to the opening set.

Taking place on March 28, Above & Beyond’s RC Cola showcase coincides with the release of “There’s Only You”, the final track from the Grammy-nominated trio’s ‘Common Ground Companion EP’ – an accompaniment to group’s #3 Billboard Hot 100 album. Above & Beyond also recently released “Show Me Love”, their first collaboration with fellow electronic artist Armin van Buuren, with the track already storming the dance airplay and Beatport charts. Learn more and get tickets for Above & Beyond Miami Music Week 2019 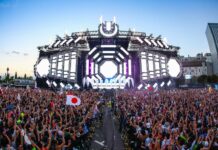