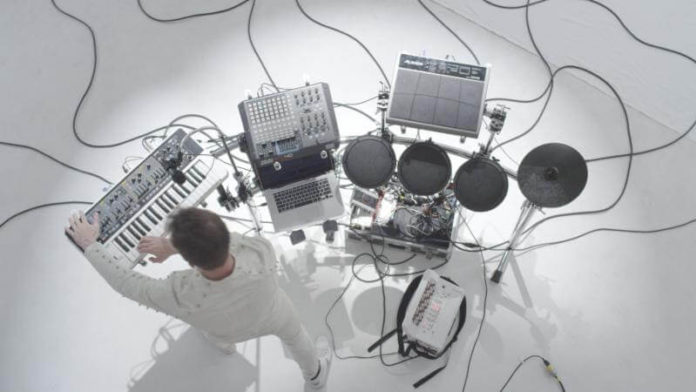 Four cases and a frame make up the basis and he explains in detail how everything is set up.

Using time lapse we see Alpine set up the rig. The frame comes from Gibraltar and is used to hold various pieces of gear together at easy reach. The laptop running Ableton Live is the heart of the rig, but hidden a little so the audience doesn’t really notice.

The set up further consists of a Roland master keyboard, a pressure sensitive pedal, an Akai APC 40 to trigger parts from various songs at the touch of a button.

Furthermore Alpine has custom effects and a percussion section with big toms. These big toms never change and are a staple of the Alpine sound.

Check out the video to see all and learn!

If you’re into the Alpine Universe sound, don’t forget to check out the LEAP OF FAITH video that he released a few weeks ago in which you can see the entire live set up in action.

The video directed by Spanish director German Izquierdo Valero features Favre performing live with a custom rig made of unique electronic and midi instruments. Alpine Universe vows to encourage the EDM scene to keep expanding towards new horizons with live settings and studio experimentation. The strength of electronic music is that it is a HUGE spectrum of genres. Alpine aims to explore some untouched areas of that spectrum and take the time to craft new sounds, even if the music is hard to classify in the end.

ALPINE UNIVERSE: “In the Leap Of Faith music video I perform a series of solos on different instruments: a synthesizer, midi finger-triggers, pedals, electronic drums and an electronic accordion. It demonstrates how electronic music can have a lot of performance elements within a DJ setup. German and I wanted this video to have an artful aesthetic, not just a performance recording. German brought his sense of visual storytelling, philosophy and symbolism to the screen in a very subtle and tasteful way.”

Alpine Universe is currently working on a single with the Musyca Children’s Choir in Los Angeles: They are about to record some new music with a group of more than 40 kids. He is also part of the artist collective Everett Entertainment. They just started a new record label called Space Gang Records specializing in bass music, trap and hip-hop.

Get ‘Leap Of Faith’ here.