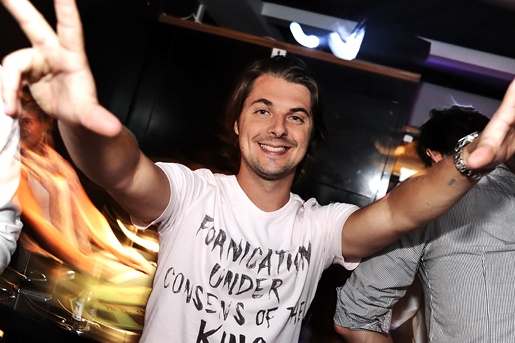 Fans have been long awaiting the reunion of Swedish House Mafia. Well guess what? Axwell just teased it yet again…

While this isn’t that big a tease as you may be expecting, fans across the world are already losing their minds (I don’t see why). All three members of SHM have repeatedly stated their reasons for breaking up the group and said it was fun, but it was time for them to branch out, though the thought of working together would always be in the back of their minds. After all they did reach the greatest heights together with huge sold out shows across the world.

Earlier on Zane Lowe‘s BBC Radio 1 show, while premiering the new Axwell Ingrosso track, “Waiting For So Long”, Axwell mentioned the following about the possibility of a SHM reunion.

We think about it every now and then, you know what we left, what we did, what we accomplished and everything, and how it would be to do something together again. But I think, the only thing is that time will tell pretty much. We have been blessed to be riding this wave, and just ahead of the wave for some time now, so you know we are able to do exactly what we want, which is a blessing. You know this song that we just played, it was just like no thoughts, no need, no nothing, just music. Who knows what happens in the future, we might get a sudden urge for Swedish House Mafia again… who knows!

To be honest, I wouldn’t want them to get back any time soon… Axwell & Ingrosso are doing fine on their own and Steve Angello’s got his album coming out soon enough as well. Coming back together anytime in the next few years would just make them hypocrites to say the least. Though, thats my opinion. If you can’t wait to jump up high and fist-pump to the tune of greyhound or ‘Dont you worry child’ once again then keep hoping for them to get back soon.

EDM News Melody Siganporia - August 9, 2020
0
Former DJ on The Ellen DeGeneres Show, Tony Okungbowa, has been the latest to add to the recent allegations about the show’s workplace being...

Music Akshay Bhanawat - August 8, 2020
0
Kutski is stepping in with his Basscon Records label debut, which arrives in the form of his latest single, “Let Me Tell You.” Having...
ABOUT US
What started as an interest, slowly turned into a passion, and before we knew it, we had curated and founded a thriving community of avid electronic dance music lovers.
FOLLOW US
© Copyright 2020 - T.H.E Music Essentials