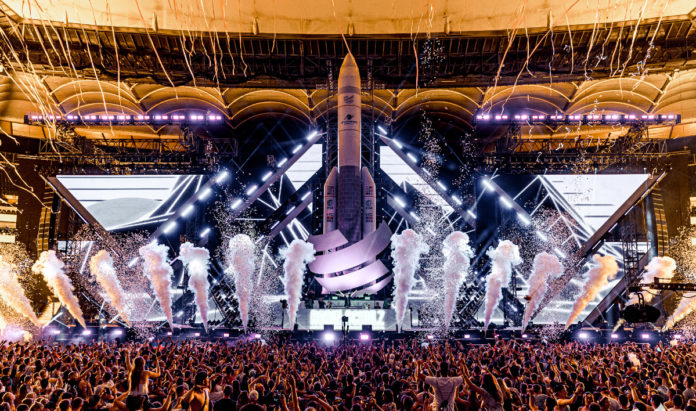 Thanks to the enormous success of WCD Pool Sessions at the beginning of September, Frankfurt based event specialist BigCityBeats inspired hope throughout Germany’s event and festival industry, providing with it a renewed sense of optimism.

On 7/8/9 January 2022, the Winter Edition of BigCityBeats WORLD CLUB DOME is set to be the first festival of its kind held worldwide. The MERKUR SPIEL-ARENA in Dusseldorf is once again being transformed into the “largest winter club in the world“. The first incredible headline acts have been announced with Boris Brejcha, Headhunterz, Angerfist and Le Shuuk set to perform for the expected sell-out crowd.

Michael Brill, CEO D.LIVE: “In 2022, WORLD CLUB DOME will be coming to the MERKUR-SPIEL ARENA for the third time with its Winter Edition, transforming it into the largest club in the world. After a long time without any events, or club events, young people can finally return to the dance floor! We are pleased that this event can be implemented with a well-thought-out Corona protection concept and all necessary measures to offer the fans a safe and relaxed environment!“

BigCityBeat’s flagship WORLD CLUB DOME in Frankfurt’s Deutsche Bank Park, will take place from June 3rd to June 5th, 2022. The ‘Las Vegas Edition’ theme remains and as a result the entire stadium including all outdoor areas, in addition to being “the largest club in the world“, will become the ‘greatest entertainment extravaganza in the world’. WORLD CLUB DOME brings the excitement and glamour of Las Vegas to Frankfurt, and along with the glamour, the Las Vegas Edition presents the best DJ lineup of the summer. The first superstar DJs already announced are David Guetta, DJ Snake, Oliver Heldens, Robin Schulz, Scooter, Steve Aoki, Sven Väth, Timmy Trumpet and Le Shuuk.

The media raved with reports on the WCD Pool Sessions

The opening festival of the 2022 season was without a shadow of a doubt the 2021 WCD Pool Sessions. BigCityBeats CEO Bernd Breiter successfully won the court case that allowed 25,000 electronic music fans to celebrate the first festival after lockdown in Germany, and as a result was praised by national and international media circles alike.

The Bild Zeitung wrote: „World Club Dome creator Bernd Breiter has revived the festival culture with the Pool Sessions.“ RTL reported: „He fought like a lion, now Bernd Breiter can once again organize the World Club Dome.“ Frankfurter Neue Presse said: „Much praise for the organizer of the World Club Dome Pool Sessions.“ The Westdeutsche Allgemeine Zeitung wrote in advance: „WCD Pool Sessions – Finally light at the end of the horizon – for culture fans and for those working in the culture industry.“ Sat.1 reported: „World Club Dome – the first festival of this size since the beginning of the Corona pandemic.“ The international EDM magazine EDMjoy.com even ran the headline: „Bernd Breiter Ends Germany’s Festival Lockdown“. For Patrik Meyer, Managing Director of Deutsche Bank Park, the WCD Pool Sessions were „a milestone“ and Oliver Schwebel (Managing Director of Frankfurt Economic Development) summed up: „What Bernd Breiter has achieved is unbelievable.“

Ticket sales for the Las Vegas Edition of BigCityBeats WORLD CLUB DOME have just started. The 3-day ticket is available in the early bird phase for 127.00 euros plus fees at www.worldclubdome.com.