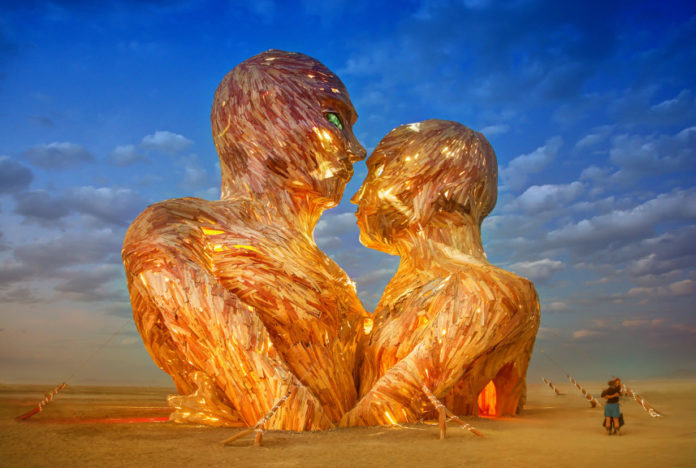 A swarm of bugs have plagued the Burning Man grounds just two weeks before the event and have been causing physical harm to workers. The Nysuys or seed bugs are the main cause of concern. The seed bugs thrive in the desert, feeding off only the moisture in weeds and grasses. Unfortunately, these bugs don’t differentiate between plant life and humans, so when they land on skin, they pierce through looking for food, which can leave behind a mark. People have also broken out into rashes causing problems for the organizers and workers alike.

To make problems even worse, a 50-year-old man working with the group that constructs the Burning Man city, Scott “Spoono” Stephenson passed away.

Burning Man announced today the loss of beloved Department of Public Works staff member Scott “Spoono” Stephenson. Spoono passed away overnight on the playa, in the city he loved most.

Stephenson was in his late 50s and died of apparent natural causes, according to Pershing County officials. Stevenson had been in Gerlach and on the playa since April supporting construction of Black Rock City. His passing will have an enormous impact on the Burning Man community.

“Spoono has been a fixture of our DPW since 2005,” said Burning Man CEO Marian Goodell. “In 2005 he was one of the first to depart for Mississippi to help residents in the wake of Hurricane Katrina, working, among other things, as a cook for the team that grew to become Burners Without Borders. He will be missed by many of us including myself.”

Spoono was a founding crew member of Black Rock Solar, working tirelessly to install solar arrays across Nevada for those who would benefit most – schools, hospitals, tribes, and other non-profit organizations – for six years. He’d been a Runner for DPW’s purchasing department for 10 years and cooked for work weekends for equally as long, as well as handling cooking for early arrival crews on the ranch for several years. He was on point to cook for the Man crew when we had to rebuild the man in 2007.

“Spoon was a deeply generous man, with a huge heart, who gave so much love and care though his food,” said Tom Price, one of the founders of Burners Without Borders and founding Executive Director of Black Rock Solar. “He was a miracle worker with food—I once watched him feed 15 volunteers for a week with only $50. He always worked himself to exhaustion, but didn’t have a lick of quit in him—there was never a morning you woke up he didn’t have coffee on, strong enough to strip paint. And if you were really good, or really lucky, it came with a side of piping hot beignets.”

Spoono embodied the best of Burning Man values and culture. He was generous to a fault, giving all that he had to the community he loved. He will be missed by all who knew him.

Burning Man is providing support and grief counseling to staff and volunteers on the playa during this difficult time.

Plans for a celebration of life and memorial service will be announced shortly.