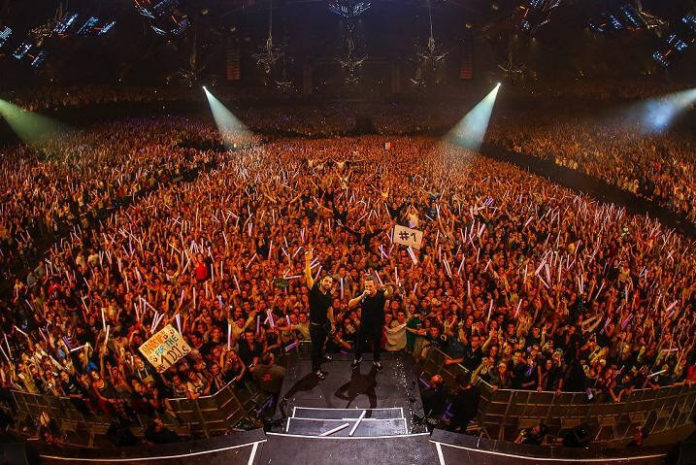 Trailblazing their home country with 3 gargantuan shows, the current World #1 DJ’s Dimitri Vegas & Like Mike brought their biggest and boldest concept to date to the city of Antwerp during the 3rd weekend of December.

Now fans that wish to relive this momentous spectacle once more, or for those fans who were unable to attend the weekend’s proceedings, the Belgian brothers are releasing the full 2.5 hour show in high definition on YouTube.

Completing 3 sold-out nights at the Sportpaleis Arena with their new production ‘Bringing The Madness 3.0’, and with fans flying in from all over the world, the brothers delivered an audio and visual feast in front of 60,000 illuminated and buzzing music lovers throughout the entire weekend’s proceedings. An enormous triumph by any musical artist’s standard, especially considering the vigorous way fans snapped up the initial run of 40,000 tickets in under 40 minutes – a feat previously seen only from the likes of iconic artists U2, Madonna, Coldplay and Beyoncé – encouraging the brothers to add an additional 3rd date to the run of shows and increase the total ticket volume for the opening weekend to an eye-popping 60,000 capacity.

Across the 3-day run of shows some of music’s biggest names made surprise appearances to join the Belgium’s biggest DJ’s on stage. From the undeniable stardom of EDM’s power punching Afrojack to the global flag-bearer of the entire trance movement Armin Van Buuren, and the tangible musical prowess of Grammy-Award Winning ‘Higher Place’ collaborator Ne-Yo, each evening was packed with an array of surprises that kept all of the 60,000 firmly fixated on the nights expectations. Alongside the impressive line-up of headline acts, the launch weekend of the ‘Bringing The Madness 3.0’ world ensured that both atmosphere and energy levels were ever high and peaking with the unveiling of the new mainstage show and set!

Following on from the release of the livestream video of their 2014 sold-out ‘Bringing Home The Madness’ concert, which to date has received over 25 million YouTube views, this year’s livestream video gives fans an opportunity to witness the impressive stage production from the team behind Tomorrowland, feast in the special ‘back to their roots’ all-vinyl set by Dimitri Vegas and experience the coming together of some of dance music’s biggest stars for exclusive b2b performances.

Even when surrounded by over 400 kilograms of confetti and 55 tonnes of CO2, it seems dance music’s biggest DJ’s still know how to raise the bar and further that, well and truly cement the notion that their 2016 show ‘Bringing The Madness 3.0’ is a must see for the year ahead.

With recent news that their Ne-Yo collaboration ‘Higher Place’ just topped the Billboard Dance Club chart holding the #1 spot, as well as receiving more than 15 million Spotify streams and over 10 million YouTube views, the duo will now head to the U.S. for the first quarter of 2016 to complete work on their debut artist album.