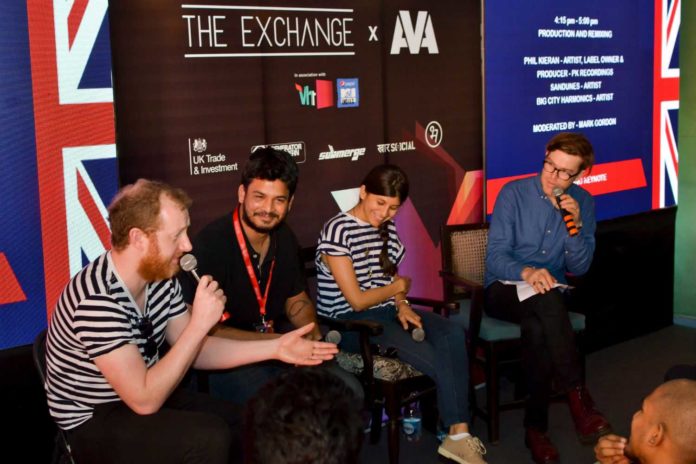 United Kingdom’s Department for International Trade in collaboration with Mumbai-based music promoter Submerge are bringing back The Exchange, a dedicated music conference and showcase, to Mumbai in March.

The conference will feature music industry professionals from India and the United Kingdom, and will be held on March 28, followed by a showcase on March 31 at Khar Social in Mumbai.

To attend the conference, people can register here.

Since its first edition in November 2014, The Exchange has grown into a highly-successful international conference-based initiative to connect the music industry sectors in India and UK.

Speaking on the importance of an initiative like The Exchange, British Deputy High Commissioner, Mumbai and Director General for Department for International Trade India, Kumar Iyer said, “British music is a worldwide brand, recognised for its vibrancy and character. UK musicians have played a pivotal part in the development of new musical forms, from house music to punk, glam rock, dubstep and grime. And it is extremely popular among Indians! The rousing response to Coldplay’s maiden concert in Mumbai last year indicates that the appetite is only growing.”

“I am excited that some of the best and most advanced British music companies are coming to India and participating in a dedicated music conference. This is a great opportunity for both countries to collaborate and produce something stimulating for the next generation of Indian music lovers,” he added.

The UK music scene continues to confound global expectations and set new benchmarks in track consumption, the club and live sector, and as a key lifestyle driver. Industry reports say that the core music industry made an estimated economic contribution of about £4.1bn to the UK economy in 2015 and supported 1,19,000 jobs.

The conference will seek to take some of the UK’s and India’s electronic industry professionals – from DJs and performers to digital marketers – and facilitate a series of panels and discussions designed to stimulate conversations around where the global electronic music sector is headed, and how the UK and India’s key electronic stakeholders can create new collaborations and partnerships in its development.

One of the key success stories to have emerged from The Exchange in the past years is the expansion of music distribution business Horus Music to India, post their continued visits here through the trade mission in 2014. Horus Music established their India office in Mumbai in December 2015 to help Indian artists and labels distribute their music around the world.

While information on all the delegates at The Exchange 2017 will be made available soon, some exciting names include The Beatles Story, the world’s largest permanent exhibition purely devoted to the lives and times of ‘The Beatles’ in Liverpool. The Beatles Story have set their sight on India, since 2018 is the 50th anniversary of The Beatles’ visit to Rishikesh in India and are looking to celebrate this anniversary through engagement with key Indian partners.

Another visitor is the Beggars Group, the home of UK-based international labels such 4AD, Matador, Rough Trade Records, XL Recordings and Young Turks, who want to build their presence in the Indian market through local partnerships with labels, promoters and retailers.

Sarah McBriar, founder of AVA Festival and Conference in Belfast, visited India as part of The Exchange x AVA showcase in 2016 and returns to India to build on the relationships that they initiated last year.

Alongside the conference, UK industry representatives get an opportunity to network with their counterparts in India. A delegation of nearly 30 UK companies from the music sector will participate in the conference to look for opportunities to work with the Indian sector.

The trade mission is funded by British Phonographic Industry (BPI), which represents and supports the recorded music industry in the UK including over 300 music companies and major music labels such as Universal, Sony and Warner, and AIM (Association For Independent Music), a trade body that supports and represents over 800 member companies and is a collective voice for UK’s independent music industry.

Chris Tams, BPI director of Independent Membership and International, says, “From Hollywood to Bollywood, BPI continues to forge relationships in overseas markets to support the growth of British music around the world. India is a popular destination on the world music map and is becoming a hotspot for UK acts to tour and perform. The mission offers a host of opportunities to the independent sector for understanding the huge potential of the market and for meeting those who can open the right doors to lead to commercial success.”

Paul Pacifico, CEO/Chairman of AIM, is equally enthusiastic. “Our members have shown a keen interest in developing markets such as India which has huge potential for British artists. Combined with the growth in streaming where independent repertoire is enjoying strong worldwide growth, the latest mission to India is perfect timing,” he says.

Issues to be discussed

The conference themes will include discussions on the current trends in production and sound technology in the UK and India, understanding music consumption patterns in tier II cities, recognizing the potential of online radio in India, why India will see a rise in boutique festivals and celebrating the legacy of vinyl, among other issues.

Details on the speakers and panels and showcase will be announced soon.

Registration is now open and interested applicants can registers at http://www.theexchange.in/

This event takes place as part of the UK/India 2017 Year of Culture, a celebration of the long-standing relationship between the UK and India which will see cultural events, exhibitions and activities taking place in both countries throughout 2017.