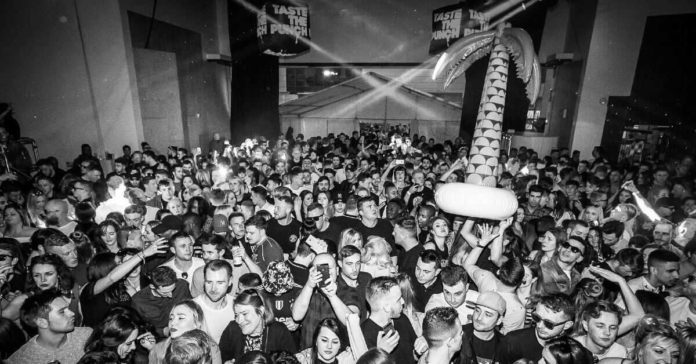 Ibiza is a place to seek out big names, new talent and the best parties of your life. Taste The Punch arrive in Ibiza with plans to deliver all the above and more. The fast-rising party promoters from Luton, England are taking over Eden nightclub in San Antonio every Friday night from 16th June to 29th September. The first headline acts announced are Faithless (DJ set), Mark Knight, Weiss, Lee Walker, Lauren Lo Sung, Icarus and Monki (BBC Radio 1), Marshall Jefferson, Tough Love and George Kwali. Alongside the high quality names already announced, expect a wide spectrum of unmissable artists at the top of their game, and a showcase of DJ’s that continue to drive dance music culture in every corner of the globe. Advance tickets can be purchased at www.tastethepunch.com/ibiza or www.edenibiza.com starting from just €25.

Just 4 years ago, 2 brothers decided they would recreate the vibes of London’s hottest raves and secret parties, 30 minutes north of the capital, in Luton. Since then, Taste The Punch has become one of the country’s best underground dance events, welcoming such luminaries as Pete Tong, B Traits, Claptone, Annie Mac, Amine Edge & DANCE, Mark Knight, Darius Syrossian and many more to ‘the punchbowl’ turntables. Last year saw Taste The Punch hit new heights as they hosted a stage at Eastern Electrics Festival. The unstoppable upward trajectory continues with their first Ibiza residency, where Taste The Punch will expand their horizons again, booking a wider range of must-see acts for the very first time. Faithless need little introduction, selling over 15 million records worldwide, giving electronic music some of its finest moments with tracks like ‘Insomnia’, ‘God Is A DJ’ and ‘We Come 1’. Over 20 years they’ve delivered consistently, whether on stage or behind the decks with Sister Bliss, and are a fitting name to kick off Taste The Punch’s Ibiza announcement. Expect 3 massive sets at Eden this season. Mark Knight remains one of house music’s most influential names (his Toolroom Radio show now reaches over 13.5 million people in over 60 countries). The Toolroom Records boss is one of the scene’s most accomplished producers and his innate ability to rock any dancefloor has seen him become a firm favourite of the Taste The Punch crowds. Mark Knight behind the turntables at Eden is a guaranteed Ibiza classic.

Another Toolroom and Taste The Punch regular, Weiss also joins the Eden lineup. Expect quality, jackin’ beats and rumbling basslines to shake the island as Weiss shows why he’s one of the biggest new names out there, with support from the likes of Pete Tong, Claptone, Gorgon City, Claude Von Stroke, Hot Since 82 and more.

Taste The Punch continues to mix up the massive names with the rising stars as they bring Lee Walker to the white isle. His massive rework of DJ Deeon ‘Freak Like Me’ remains a true house anthem. Liverpool’s Lauren Lo Sung also lines up; a proven new talent at Carl Cox’s Revolution party at Space Ibiza, The Warehouse Project, Sankeys Ibiza, Bedrock and more. Icarus is the name on everyone’s lips right now. The Bristolian duo recently scored the ‘hottest record in the world’ on Radio 1 with their stunning edit of Arle ‘Close To You’ and again with their original track ‘King Kong’. George Kwali also joins the lineup with his Kideko collab ‘Crank It’ still ranking as one of biggest house tunes around.

Taste The Punch loves to mix it up and brings a selection of highly rated and experienced names to ‘the Ibiza punchbowl’. Monki is one of the most talented and versatile DJs currently on BBC Radio 1. Her eclectic, high energy mix of styles – everything with a groove, is perfect for the open-minded Taste The Punch crowds. House legend Marshall Jefferson will take over for an exclusive gig, his only confirmed Ibiza date so far this season! House fans should not miss the chance to see one of the originators of house music in action. And quality crossover duo Tough Love will bring their Get Twisted night to Taste The Punch, taking the dancefloor on an unforgettable trip to the bassier side of house.

Taste The Punch will truly celebrate the spirit of Ibiza, delivering a spectacular experience, as well as a diverse array of music and Friday night’s most accessible party vibe.