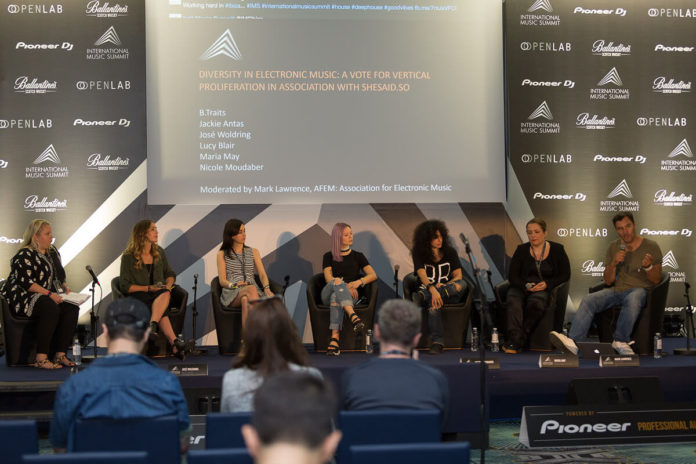 Confirming their position as industry leaders in presenting educational, inspirational and motivational discussions within the electronic music industry, the ninth edition of IMS Ibiza 2016 provided another hugely insightful three-day summit.

An amalgamation of subjects saw issues of streaming, major labels, diversity and the future of the island itself serve as talking points, plus an array of keynote interviews from the likes of Pet Shop Boys, Erick Morillo, Yann Pissenem, as well as an exclusive announcement from Swiss duo Yello.

Taking place at The Hard Rock Hotel, day one of the conference began with strategy specialist, Kevin Watson presenting this year’s IMS Business Report. The report announced the huge increase in revenue, with the Electronic Music Industry now worth $7.1 Billion – 60% more than in 2013. Following on from this, Dubset CEO Stephen White announced that the company has struck a deal with Spotify in order to make it possible for DJs to upload and legally stream original long-form mixes and single track remixes.

“We’re seeing evolution. Dance music is a very focus for all of them in ways that it hasn’t been before. It’s evolving towards an understanding towards the genre, and a better approach.” – Stephen White

The conference later took an emotional turn with ‘Space Ibiza: End of an Era’ discussion with Space Ibiza Legend Carl Cox, his manager Lynn Cosgrove and this year’s IMS Legend, Space Owner Pepe Roselló. The much anticipated panel gave a poignant overview of the revered Ibiza venue over the years, which has been adored by many all over the world. Space Owner, Pepe Roselló received a standing ovation towards the end of his final word.

“Without a full-fledged trust and love from Pepe, it never would have happened. Always quality. You have never skimped or saved on anything. It is beautiful. From my heart, always love. Always will.” – Lynn Cosgrove

“The situation at Space is beyond our control… I’m being very dramatic here. I’ve had in my lifetime, the best 15 years at Space. I’m going to leave with a bang like you’ve never seen before. It’s been my church for the past 15 years.” – Carl Cox

Rounding off the first day of IMS Ibiza was music journalist and DJ, Dave Haslam who discussed the Vinyl Exchange with Seth Troxler for the first time, exclusively for IMS 2016. Both declaring their admiration for vinyl, the duo played a selection of their favourites from the collection.

“Through music, I can find the feelings that I can’t show or express. It adds emotion and expression to your life. That’s something that people have lost when you digitize music.” – Seth Troxler

Day Two of the conference started with an in-depth keynote with renowned American DJ, Erick Morillo who spoke to Pete Tong about his relationship with drugs and how he overcame his demons. Divulging through the ups and downs of what life is like for a touring DJ, Erick gave an honest account of his ketamine addiction, explaining:

“When all these young DJs were all of a sudden blowing up and eclipsing me, my ego couldn’t take it. My ego couldn’t take that I wasn’t the top dog anymore. That’s when things started to unravel. Then I started making music I didn’t love and playing music I didn’t love. That’s when things started to get really bad.” – Erick Morillo

Elsewhere, the most progressive and innovative purveyors of Dance Music: Black Coffee, Dubfire, James Zabiela, Nicole Moudaber, Carmine Conte (Tale Of Us) and Richie Hawtin discussed the topic, ‘Striving For Excellence & The Art of Playing Differently’ which was centred around the recent launch of Richie Hawtin’s MODEL1 mixer by his PLAYdifferently company.

Later on, IMS co-founder Pete Tong weighed in on the making of his Ibiza Prom, which celebrated 20 years of Radio 1 in Ibiza last year. Conductor Jules Buckley expressed the positivity surrounding the event, stating

“It goes to prove how much people love this music. It’s fair to say that we also didn’t know what the reaction would be. It could have bombed.” – Jules Buckley

Next up, was the highly anticipated keynote interview with Founder/CEO of Ushuaïa, Spain, Yann Pissenem. In the keynote, Grego O’Halloran of Ibiza Spotlight raised the tender subject of Space Ibiza’s closing and the future of the club – which he has now acquired – with Yann dousing fears that he will be demolishing the venue.

“After the amazing and fabulous creative work that Pepe has done in the last 27 years, I’m glad and proud to step in. With a lot of respect. It’s a big responsibility for me for the international scene, the electronic scene.” – Yann Pissenem

To round off, IMS and Mixmag crowned KRPT LDN founder Inder Phull as this year’s Visionaries contest winner. Maintaining the spotlight on Electronic Music, Mixmag presented ‘The New Breed’ panel with Danny Daze, Danny Howard, Francesca Lombardo and Kölsch, which explored the experiences of big-breakthrough artists of the past year.

Bowing out of a successful day two of talks, the final day of the conference saw some of the island’s most influential players come together to discuss the Great Annual Ibiza debate. Shauna Slevin (manager of The Martinez Brothers) suggested a growing saturation within the island, whilst Pete Tong added that, despite, other up and coming territories, it still remains of huge importance.

“There are a lot of roadblocks in Ibiza to do your own thing. There’s a lot of competition.” – Shauna Slevin

“If you’re an underground DJ, up-and-coming and playing on the house and techno scene, playing in Brooklyn and Detroit, I think it’s very important to still come to Ibiza. It depends on what kind of music you’re in.” – Pete Tong

A keynote interview with legendary Swiss electronica duo Yello followed, which saw them exclusively announce their first live tour in their 38-year career as well as a brand new album, Toy.

“This album will be more uptempo, more poppy. With some typical Yello sound effects.” – Boris Blank

One of the most talked about discussions of the day was the Diversity In Electronic Music panel, which was held in association with global network Shesaid.so. Tackling issues of female representation within the electronic music industry, Jackie Antas of Live Nation provided a run-down of current statistics to kickstart the debate:

– In 2014, only 18% of electronic labels include women on their rosters

Nicole Moudaber gave a frank viewpoint around this representation, and suggested that both women, and men, need to be focused in order to achieve success in the industry.

“Not a lot of men can do what I do, so maybe not a lot of women can do what I do too? I don’t think any man has achieved what I have done in such a short period of time…I hope I can be an inspiration, an example to women. But I never thought it was this massive problem, actually.” – Nicole Moudaber

Discussing the need to implement a change in thought processes globally – and recognising that these vary from culture to culture – there was no doubt that the industry needs to represent women more fairly.

Closing the ninth IMS Ibiza conference was a keynote interview with legendary duo Pet Shop Boys, who opened up about their longstanding career within the scene:

“We haven’t taken a break. You have to exercise the muscles of your creativity to keep them strong. We’re always chasing the idea of the perfect record that’s exactly the right balance of euphoria, intelligence, sound and crazy instinct.” – Pet Shop Boys

As all eyes led to Dalt Vila – where a selection of forward-thinking artists took control of the stunning UNESCO site – Francesca Lombardo, Benjamin Damage, B Traits, Tale Of Us and Nicole Moudaber each graced the stage, with Dubfire presenting his HYBRID showcase to officially close the 2016 summit.