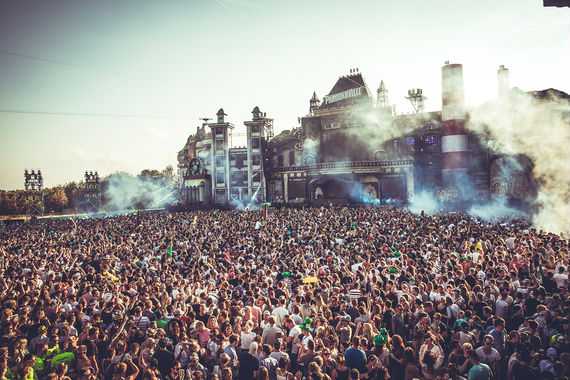 Two years since launching, Germany’s Parookaville has continue to exceed expectations, going on to become the biggest dance event in the nation. They’ve raised the bar once again, announcing the next phase of what is an absolutely incredible 2017 line-up.

The rapidly expanding festival extends across three days this year as organisers continue to go all out to ensure Parookaville retains its crown as the fastest growing dance event Germany has to offer.

To adapt to the 80,000 strong attendees expected, secret plans are in movement for a brand new area that features a completely reformatted main stage which defies description and needs to be seen in order to be believed.

Swedish duo Axwell ^ Ingrosso will be leading the international headliners set to christen the new stage, after earning rave reviews for last year’s performance. Double Grammy award winner David Guetta will be closing out the main stage on Sunday with one of his legendary sets. Known for his one of a kind live shows, Steve Aoki makes up the third of the six confirmed headliners, with yet more names to be announced over the coming weeks.

Staying true to all its glory, the earlier main stage will be rechristened Bill’s Factory, offering up more open air highlights. On Friday 23rd July, Robin Schulz takes over the Factory, hosting his renowned ‘Robin Schulz & Friends’ stage. Presented by 1LIVE, support will come from industry buddies including recently announced Kungs – the brains behind last summer’s mammoth hit ‘This Girl’.

On Saturday 24th July the legendary ‘Bootshaus’ from Cologne will transform Bill’s Factory into a veritable who’s who of Trap and Dubstep artists. Viral hit maker DJ Snake, Getter, Krewella, Marshmello, Nghtmre, Slander and Yellow Claw are just some of the guests in store.

German techno giant Sven Väth bestows his inimitable Cocoon brand to the Hangar on Saturday. The undisputed godfather of techno, Väth will call upon similar heavyweights like Dubfire, Ilario Alicante, Nakadia and Tim Green.
Parookaville is known as being a playground for dance music lovers for three magical days, with attendees invited to get lost inside the fictional city of Parookaville, forging new friends that will last a lifetime.

Bassnectar Faces Allegations for Sexual Misconduct and Announces He is Stepping Back From His...

EDM News Melody Siganporia - July 7, 2020
0
In the light of the recent allegations of sexual assault that have come up from multiple sources against Bassnectar, real name Lorin Ashton, he...

Editorials Akshay Bhanawat - July 5, 2020
0
The atmosphere of a Las Vegas casino is one of the most unique to be found anywhere on earth. After all, where else does...
ABOUT US
What started as an interest, slowly turned into a passion, and before we knew it, we had curated and founded a thriving community of avid electronic dance music lovers.
FOLLOW US
© Copyright 2020 - T.H.E Music Essentials