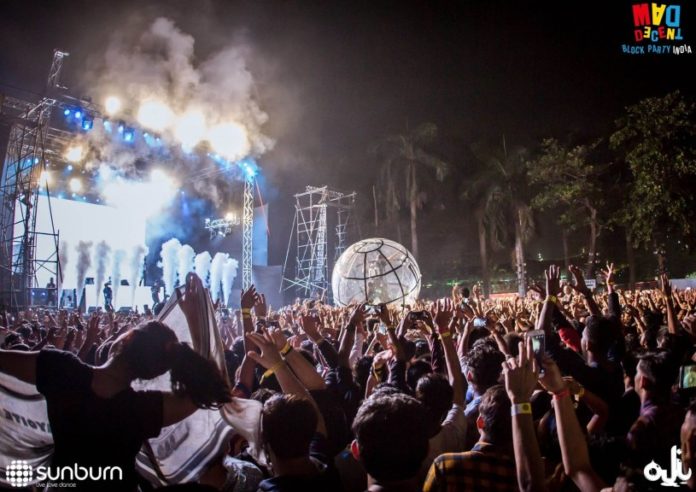 The recently concluded Mad Decent Block Party, Mumbai was indeed the ‘maddest’ party Mumbai has witnessed in a while.

Sunburn, Oji and Mad Decent brought out all the stops and then some, with everything, from the artists to the production, being top notch. Mad Decent Block Party has been a well known gathering in the Electronic Music scene for a while now, spearheaded by head honcho, Diplo and the crew. Primarily aimed at bringing the most innovative sounds from the scene, the lineup boasted of heavyweights such as Gorgon City, Big Gigantic and Giraffage, besides headliners Major Lazer.

We were witness to the event in Mumbai and managed to capture some beautiful moments. Here are the excerpts!

1. Giraffage – Music Sounds Better With You. Easily one of the most sought after classics in the scene, Giraffage’s spin to the record provides a whole new vibe, and a beautiful one at that. We were on our toes from minute one of the record. Dance Music with a twist is always welcome! And what better way than to witness live electronica with saxophones and drum scapes, coupled with trap music? We’re sure they gained a few more thousand followers after that set! With a large fan following, Gorgon City came with a bag full of tricks and more, with a bunch of groovy deep and progressive house tunes in their arsenal. They did full justice to their set, right before the headliners, leaving the crowd wanting for more. The highlight of the night was Walshy Fire’s moves on stage and his interactions with the crowd. Guy’s got moves! Well there was Diplo in a zorb, crowd dabbing and a sit down. That’s most of what went down but nothing short of madness when the entire crowd sang along to every tune from their album ‘ Peace Is The Mission’

6. Big Gigantic dropping ‘Teach Me How To Dougie’ This one needs no description! Their set was packed with the biggest tunes in the scene and what bigger than Lean On which recently hit 1 Billion views on YouTube.

Known for its Indian influence, the crew switched to the Indian attire and did the signature Lean On, that had the crowd follow suit in no time! Definitely a highlight of the night!