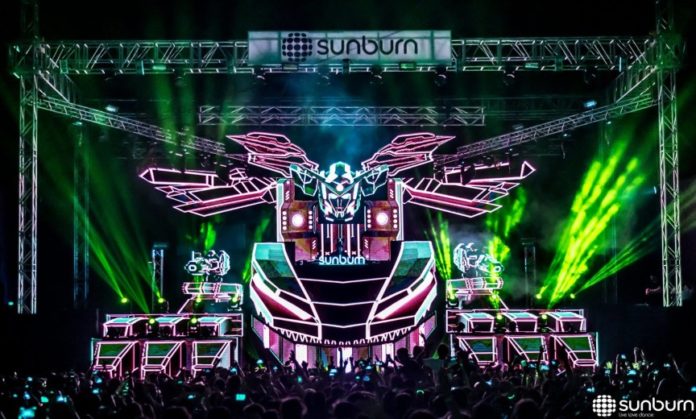 There’s never a dull moment within the precincts of a festival. Sunburn’s massive events are a firm testament to that, and we walked in to the Sunburn Mumbai with similar aspirations.

Leading to the annual mega fest in Goa every year, the Sunburn City festivals make for a preview, if you will, to the main event, with a host of quality artists bringing the madness to the forefront.

You can never go wrong with a lineup consisting of DJ Snake, R3hab, Matisse & Sadko and Chuckie, amongst others.
After slaying the city festival in Bangalore, we were excited to make our way down to catch our favourite artists in the midst of a rather enthusiastic bunch.

DJ Shaan kicked things off as we made our way in, and the young Indian prodigy never disappoints, as we’ve witnessed over the years. Dropping a host of new tunes from his peers as well as his own records, Shaan mesmerised the crowd with his tracks, “Light Up The World” and his “See You Again (Edit)” as he closed his set to make way for Matisse and Sadko.

Matisse and Sadko have been on a roll with their productions lately, with every record playing to their versatile limits. They dropped every original and remix from their arsenal, along with a bunch of other great tunes. “Dragon” and “Break Through The Silence”, their collaborations with Martin Garrix were the highlights of the set, although our personal favourite was when they dropped their electro hard hitter, “Lock N Load” mashed with Daft Punk’s “Around the World”. We could only wish they’d played a longer set! Dance music veteran and dirty dutch pioneer, DJ Chuckie then took centre stage as his antics behind the sets gained more enthusiasm as the crowd roared in approval. Chuckie has always been an entertainer behind the decks and his swift mixing and track shifting techniques left everyone awestruck.

Enter R3hab, the dutch superstar, slaying it from track 1 itself. Earning the 21st spot on the DJ mag this year, R3hab has been fantastic in the studio and even better with his livesets. Having close proximity to KSHMR, R3hab dropped their collaborations to packed festival. Every track garnered a similar roar of excitement, while R3hab played out his unreleased music and Beatport chart toppers. French superstar and the curator of the number streamed record on Spotify, DJ Snake made his way to the decks. The crowd erupted and how, with every member piercing their way to the front to get a better glimpse of the suave Frenchman. Dropping every genre under the sun, DJ Snake mesmerised the crowd with a host of trap, future, dubstep and jungle tunes. The tracks were cleverly mashed and arranged to provide the crowd with the ultimate festival experience and there was never a dull moment. He acknowledged the crowd with a greeting of ‘Happy Diwali’ to make their faces light up even more!

Closing out the festival, every festival member present took back home, a bunch of unforgettable memories and an experience of a lifetime, with anticipation to the main event in Goa.