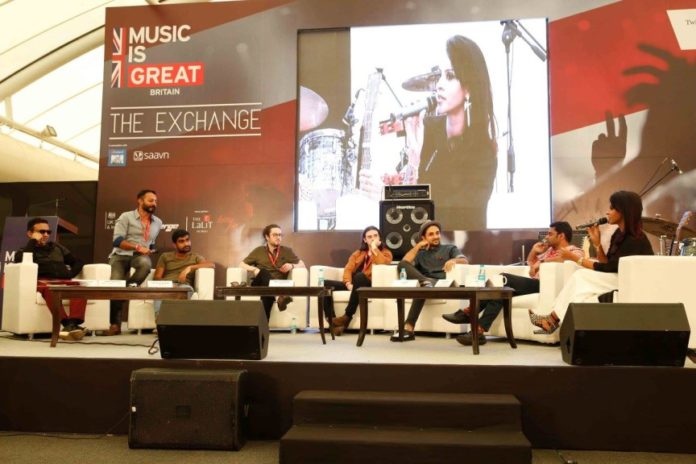 This joint initiative aimed at formulating, building and sustaining the potential business prospects between the UK and India, highlighted core concerns within the rapidly evolving music business. The two-day conference curated by Nikhil Chinapa acted as a catalyst for collaboration, exploration and expansion of the British music industry in India and culminated with a music showcase with Mark Knight. Making a debut at this year’s educative conference was The Lab, a think tank of creative individuals breaking ground in production, design and technology.

Over two days, The Exchange played host to over 30 delegates from the UK, 60 speakers and over 600 Indian delegates. The LAb, a first at The Exchange and an intimate space developed for masterclasses and to showcase technology in music was abuzz with activity through the two days. Masterclasses in the LAb were delivered by one of India’s biggest electronic artists- Arjun Vagale, ace drummer from Bhayanak Maut Rahul Hariharan, founder of Wolves Visuals- Jash Reen, Ground Kontrolle and Mixtape founder Naveen Deshpande, VJ Kaycee and many others.

Day two started off with a serious discussion on the pressing subject of “Women in Music” with the likes of Sona Mohapatra and Pearl. As the day progressed, we witness an amazing set of discussion on music festivals in India with the biggest ones representing- such as Magnetic Fields, Bacardi Enchanted Valley Carnival, Mahindra Blues Festival, BIG69 and VH1 Supersonic. Day 2 came to a close with Ehsaan and Loy in conversation with Devraj Sanyal on the new sound of Bollywood and a heartfelt thank you note delivered by Kumar Iyer- British Deputy High Commissioner at UK Trade and Investment.

Here are some of the key topics of discussion at The Exchange 2015.

Label & agent relationship with the artist

Speakers throughout the event stressed on how important it is for a mutual relationship to lie between the artist and the record label he is signed to. The discussion stressed in how labels need to push their artists to stay true to their sound, while also pushing them to make charting hits and maintaining a performance income.
The agent’s relationship with the artist was also highly stressed on with speakers calling for a change. Speakers believed the relations needed to be more developed and mentioned the importance of distribution and marketing of the music.

“My job is not to convince you to like my artist’s track, but for you to be able to have the chance to dislike it because it is also a chance for you to like it”

The changing state of music in India has seen a chunk of listeners who 5 years ago would only listen to Bollywood move to music of other languages (regional and international). From Bollywood to EDM to Indie to Punjabi, the percentage of listeners of each genre has shifted the balance away from Bollywood’s majority.

Role of women in the industry

The exchange brought about a very important, yet easily ignored topic of discussion, the role of women in the music industry. The female speakers agreed that due to discrimination they were sometimes forced to work harder for what they wanted and never had it easy. They discussed the difference in cultural aspects of the image of women in India and the UK and agreed that there was a gradual change in the industry but not something that anyone would be proud of.

One of the most interesting topics of discussion was on the Indian music festivals. With the main issues surrounding infrastructure and licences in India, festival promoters and creators agreed that the main problem with the current issues in the music festival scene is that of their own ego. The problems of competing agencies in India when it came to booking artists and the exorbitant fees being given to artists (especially in the EDM scene) was a long topic of discussion. Everyone agreed that there is no solution to it as if one party offered an X amount, there would always be another willing to double it at some point. Panellists felt that they would need to create a platform where festival owners would come together and curate music for fans in order to allow them to discover new music.

“If you don’t have discoverability, it is the beginning of the end”

In addition to panel discussions, The Exchange also held smaller seminars and tutorials for artists and producers alike in order to gain technical knowledge on the different aspects in the music industry.

The highlight of the two days was 17 years old Tarun who’s fighting against life. An HIV infected boy with dreams in his eyes, dreams to DJ alongside his inspiration Nikhil Chinapa. He attended the Exchange and met up with most of the speakers and took pointers in his little diary while The Exchange and True School Of Music came together to sponsor his three month crash course in DJing. Watch his story here.

The Exchange is part of a week-long trade mission that has been put together by UK Trade & Investment, in partnership with AIM (The Association of Independent Music) and BPI (British Phonographic Industry). The trade mission, called ‘Music is Great Britain’, from December 2nd – December 8th will see representatives of the UK music industry attend a program of educational seminars, networking events, conferences and artists showcases in a concerted bid to tap into the growing prominence of the Indian music market and expand British presence in the territory.