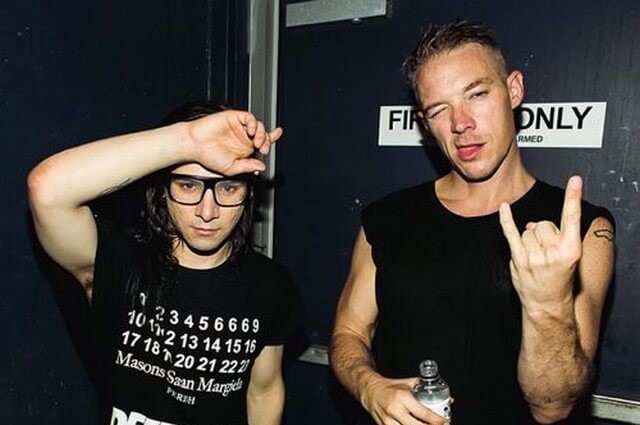 Skrillex & Diplo have both been making the news today. Skriloo for his Suicide Squad track with Rick Ross and Diplo for his Major Lazer track with Justin Bieber.

Two of the biggest producers in the electronic music industry, Skrillex & Diplo have each dropped massive releases today, and the internet is going crazy!

Lets first start off with Skrillex. Skrillex & Rick Ross’ highly anticipated collab, ‘Purple Lamborghini’ from the movie Suicide Squad has finally been released on the movie’s soundtrack album. The track was first teased months back in one of Skrillex’s live shows followed by Jared Leto dawning the Joker’s costume for the shoot of the music video.

Well the track is out in full now, check it out here:

Now time for the second hit of the day (and this one’s probably bound to blow up the one you just heard).

Major Lazer have officially released their collaboration with Justin Bieber & Mø! Yep, titled ‘Cold Water’ and featuring vocals from (almost) everyone’s favourite, Justin Bieber and Mø, the track is already close to a million views on YouTube and is being dubbed as the next huge hit of the summer. Well, its definitely no ‘Lean On’ but the track is pretty good and almost certifies the fact that Diplo and Justin can work wonders together.

Listen to the track right here:

Now that’s a wrap for the two massive hits released today. But lets not send you away empty handed. Here’s a special sneak peek to yet another Justin Bieber electronic track.

Here’s Justin Bieber & DJ Snake with ‘Let Me Love You’ from the DJ’s debut album, Encore!

Weren’t expecting that now were you? ;)