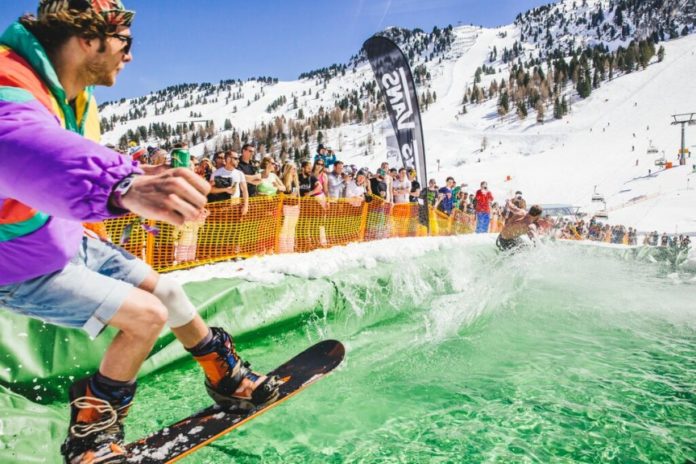 Snowbombing – the world’s No.1 music festival on snow – has unveiled the second wave of its 2016 lineup, including Bastille, Craig David’s TS5, Jamie Jones and Mark Ronson (DJ). The stellar selection of acts revealed today will join The Prodigy, Jungle, Netsky, Groove Armada, Oliver Heldens, Marcel Dettmann, Hot Since 82 and many more in the snowy town of Mayrhofen in Austria, from 4th-9th April 2016.

Nestled in a breath-taking alpine setting with snow-capped vistas, Snowbombing boasts the most awe-inspiring festival venues in the world; from a mountaintop igloo 6,000 feet above sea level, to enchanted forest clearings, cosy alpine lodges, atmospheric medieval barns, and an impressive selection of après ski bars and clubs.

Brit-award winning indie-pop maestros Bastille are set to headline one of the legendary Forest parties. Said lead singer Dan Smith: “We can’t wait to head to the mountains for Snowbombing 2016. The lineup looks great and it’s a festival we’ve always wanted to go to. Playing a gig and hanging out in the Alps… it’s going to be awesome!”.

Boosting the already phenomenal DJ line-up is Craig David. Fifteen years on from his debut album ‘Born to Do It’, the UK Garage hero has been making waves on the dance scene once again, with his weekly his TS5 radio show on Capital Xtra, a knock-out carnival show performing alongside Skrillex and Sean Paul, not to mention a much-talked about appearance on Kurupt FM where he went laid down an outstanding a cappella of Fill Me In over Jack Ü’s Where Are Ü Now. Joining him at the top of the DJ bill is Hot Creations label head and Paradise founder Jamie Jones, who’ll be bringing a slice of White Isle magic to the mountains.

It’s been almost five years since revered soul producer and one-man hit machine Mark Ronson made his first appearance at Snowbombing but finally the multi-talented musician, singer, songwriter and producer makes a welcome return His Uptown Funk single and Uptown Special album saw him score his first UK charts number 1 double in 2015, and the scene is set for him to indulge in his first love – spinning records – at Snowbombing 2016, as he steps up for a much-anticipated DJ set.

Last but not least, the irrepressible Mr. Idris Elba, who proved to be a smash at last year’s festival, will be heading back to the mountains for his second stint behind the decks at Snowbombing! With more acts still to be announced Snowbombing 2016 is shaping up to be the most incredible year yet.

So if dancing against an unparalleled panoramic backdrop that other festivals could only dream of, partying with the world’s most groundbreaking live acts and DJs, relaxing in a luxury spa or just riding the fresh white powder appeals, then join us in Mayrhofen for SB16! Packages start from just £299 (+bf) for 5 nights’ accommodation and festival wristband. Book your place by visiting www.snowbombing.com.