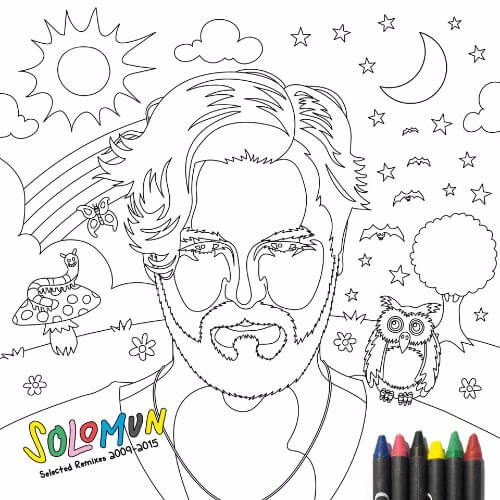 Melodic house pioneer and Diynamic figurehead Solomun is back with his latest release, a compilation of some of his best-loved remixes from over the past 7 years. Comprised of 24 tracks spread across two CDs, the collection is split into a vocal and non-vocal disc.

The first disc displays Solomun’s skill for crafting intelligent yet crossover-ready reworks of both well-known and underground songs. Amongst these are some of the producer’s most iconic tracks to date; the Solomun Vox Mix of Noir & Haze’s ‘Around’ – Resident Advisor’s no1 remix and Groove Magazine’s no2 remix of 2011 – as well as his remix of ‘Let’s Go Back’ by Kraak & Smaak, which was also Groove Magazine’s no3 remix of the same year. His remix of Foals – ‘Late Night’ from 2013 also features, which, alongside ‘Around’, has racked up over 30 million views on Youtube to date. Other offerings range from atmospheric takes on the likes of Lana Del Rey and Roisin Murphy, to the more recent, deep and downbeat remix of Whilk & Misky’s ‘Clap Your Hands’.

The largely vocal-less remixes on CD2 allow Solomun’s unique production style to shine through. The dark beats of his remix of Stimming’s ‘Una Pena’ feat. Paulo Olarte makes for an attention-grabbing start to the disc, whereas his dub mix of ‘A Love Bizarre’ by So Phat! and Claude VonStroke’s ‘The Clapping Track’ shows his funkier side. Older remixes like that of ‘Magnetic North’ by Palm Skin Productions and Marbert Rocel’s ‘Cornflake Boy’ prove Solomon’s credentials with a traditional jacking house groove, underlined by those same distinctive lush basslines and melodic elements. Tiga & Audion’s famous ’Let’s Go Dancing’ draws the compilation to a close, demonstrating Solomon’s skill for bringing an entirely new dimension to an already very well-known track.

Solomun’s ‘Selected Remixes 2009 – 2015’ is a great overview of the multiple facets of Solomon’s unique yet ever evolving production style. His seminal label Diynamic reaches its 10th anniversary this year, marking the perfect time for this retrospective release.

Solomun has risen to an iconic status of late, but it wasn’t without many years of hard work. Hailing from Hamburg, he first founded his label Diynamic in his hometown back in 2006. Today, the label has become a byword for the best in the emotive European house sound, and its showcases regularly sell out enormous venues across the world.

His unique style as a producer and DJ means he is widely revered by critics and fans alike, remaining in the top 26 and above in the coveted Resident Advisor top 100 DJs poll for the past 5 years, as well as hitting #4 in the site’s most charted producers of 2011. He’s always been in-demand as a DJ, but the launch of his ’Solomun + 1’ residency at the world-renowned Pacha Ibiza in 2013 sent his career stratospheric. His passionate energy at the club, the infamous after-parties, and at 2015’s special ’Solomun + live’ series helped to enamour a huge new legion of fans.

05 Elekfantz – Diggin’ On You (Solomun Remix)